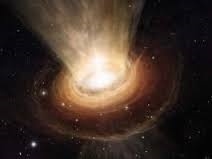 If you could focus a powerful enough laser beam on a certain spot in the celestial dome and heat it hot enough [something like 10 to the 45th power degrees Kelvin, the Planck energy], it's theoretically possible, doing so, to rip a hole in the fabric of space/time.If you then entered this worm hole you'd pass into another universe, and it's anyone's guess where you might come out.It could be the center of a planet.It could be the center of a star.It could be somewhere in the nothingness of intergalactic space.Sitting down to write a piece of original music is kind of like that.Once you've started, you've entered a worm hole of sorts, and you don't know quite yet, just where you're going to end up, or what exactly will take shape along the way, until you're further along, that is.It's where a lot of the excitement comes from.And that's all the wonder of music.