Heel Or Toe, Part I 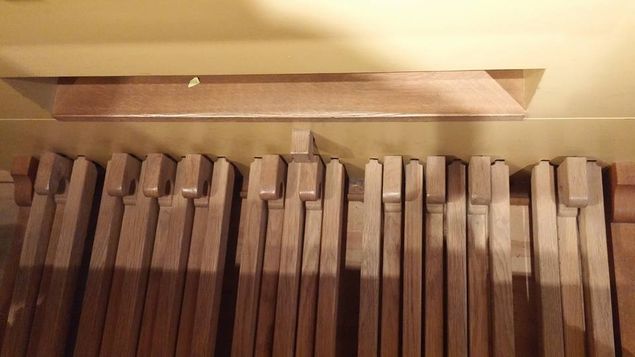 The choice of heel or toe in organ playing is governed by several factors. among which are: 1) the type of pedalboard upon which the organist must play (i.e., the length and shape of the pedal keys and how they're arranged), 2) the range of the pedalboard where the feet are playing, 3) the type of music being played and its date of composition, 4) what's going on with the hands at the time and the effect on the overall fulcrum (i.e., the coordination of the whole body), and 5) to a lesser extent, on mechanical action instruments, how stiff the pedals keys are to play, because of linkage.Up until the 19th century Germany led the world in organ building, and all of the early, historic organs built along Germanic lines were supplied with a pedalboard of shorter compass that what is found on modern organs -- usually only 2 octaves from D1 to D3, 25 notes; sometimes an additional note (bottom C) also would be supplied; the pedalboard was flat non-radiating with short natural keys and short, stubby sharps having a small projection facing the player (photo).In the middle range of such a pedalboard the use of the heels was possible, if the organist wanted to; at the extreme ends the heels were awkward to employ and seldom, if ever, used; this was also true with the pedal clavichord, the usual practice instrument used at home in the days of J.S. Bach.As there was no swell shoe, a ledge, railing, or small projection above the pedalboard was often supplied; such a projection was usually situated over the center of the pedals which the organist might use to "push off" with the opposite foot to assist with turning the body to better reach the pedals on both extreme ends (photo).An example of these types of features may be seen with the pedals of the historic mechanical action organ in the Germanic Church in Stockholm, Sweden (photo).Organ music written prior to c. 1800, which includes all of the Bach repertoire, was written with this type of pedalboard in mind, as the early German organ was, of course, the only type of organ Bach knew.Since the pedal sharps were too short to ever be played with the heels, and if the heels were not used at all on the natural keys, all scalar passages for pedals in those early days were typically performed with alternating toes, there being necessary and definite breaks between adjacent moving notes, generally sounding with broken touch rather than legato; the left foot was kept behind the right, and the heels, if used at all, were never employed at the extreme ends of the pedalboard.This preference for using alternating toes allowed these early organists to lean into the pedal more, but they also discovered that what worked well in one passage sometimes didn't work as well when the same melodic curve in the pedal line was repeated in a different passage.The premise of always pedalling the same notes the same way in all passages may be good and since the 1970's has been considered stylistically correct for early music, but how well it may actually work on a standard Guild pedalboard depends upon what the hands are doing at the time and it's effect upon the overall fulcrum, i.e., the balance of the body.What works fine in one application may or may not work in another.We sometimes find the pedals keys of early, mechanical-action organs very stiff to play because of linkage, and, in these situations, heels naturally will not work as well as the toes.At times we find that, with a Guild pedalboard, it's easier in fact to play a highly contrapuntal work like a multi-voice fugue with alternating toes, using the heels on white keys when needed to get a smooth performance with toes-only technique.The way pedal technique is adapted to facilitate performance on an early Germanic-styled pedalboard does not blindly imply however that the same adaptations MUST be retained when working with a standard Guild pedalboard when it would make performing the same work more difficult.Around the turn of the 20th century organists from all over the world were in fact starved for a pedalboard which could be more easily used, both musically and mechanically; they were not thinking as organists do today, WHICH IS, to apply one type of pedalling for early music and employ another type for everything else.When a performer plays Bach on an organ today, other organists are often quick to comment that "You must use only toes ... You are not allowed to use heels ... EVER."If we are then supposed to play Bach as he would have played his own music, does that mean in costume? ... Are we to disconnect the blower, install tread bellows, and hire homeless people to pump it for us? ... of course not.The point is this: Music is meant to be interpreted.The player should command the technique (in whatever form it must take to play a controlled bass line on the pedals of the instrument at hand) -- not have the technique enslave the player.(con't in Part II)