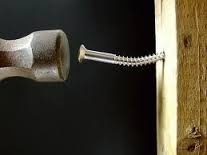 Ever see this? ... to many academics in the organ world it's like watching an organist playing barefoot or in their socks.To them playing the pedals without footwear has the organist working without the "right" tools -- like trying to drive a screw with a hammer.For the majority of carpenters two necessary tools would be missing: 1) a drill (to form the pilot hole) and 2) the screwdriver -- and not just any screwdriver; it has to have the right blade and be of the right size.It's pretty much the same with an organist's footwear; and not just any footwear [ See blog, Balance in Organ Playing Part I, Shoes Parts I-VI, The Ten Commandments Of Organ Practice].There are many who would take issue with this; some organists play shoeless, they practice that way, perform in public that way, and prefer it that way.Depending upon where their lessons are conducted, sometimes organ students are not allowed to wear shoes into the studio; and in some homes where practicing takes place, people don't wear shoes inside the house; this engenders the habit of never wearing shoes to play.What everyone seems to agree on, is that it's never a good idea to play the organ in street shoes; their construct is usually not conducive for performing at the organ and can lead to many mistakes in playing; additionally, any dust, dirt, or other grime on their soles can be transferred to the pedal keys this way, which is disrespectful not only to the instrument but to the institution which owns it and every other organist who expects to use it afterwards.The surfaces of organ pedal keys should always remain clean, free of dirt, polished, and easy to glide upon with leather soles.Playing in our socks also has some major disadvantages: trying to play a Romantic or Modern virtuoso piece this way, without an elevated heel, increases the amount of ankle movement required, especially in rapid passages, which can be harmful to the ankles if they're flexed too much, and certain maneuvers, such as playing 3rds with a single foot by stepping across an intervening pedal key, becomes impossible; the situation can also become comical during a recital when the console is in full view of the audience and the performer is either walking in their socks to the bench or going through the motions of removing their shoes or slippers to play; some churches and auditoriums are also very cold in the winter and this is no environment in which not to be wearing footwear.When we're forced to play in a very cold church, even the wearing of organ shoes can be dangerous to the feet because organ shoes fit tightly, even with thin dress socks on, and are always right on the edge of being too small for us.When organ shoes are on for a long time in a cold church the toes can freeze, which can have us in big, big trouble; the toes can get red and swollen, which indicates first degree frostbite.This has been known to happen before, and those organists who are forced to perform during winter in a cold church often put two pair of woolen socks on their feet instead of organ shoes for this reason, because they're less likely to freeze their feet.The other option would be to put the organ shoes on right before the performance and then take them off at the soonest opportunity, so that they're on the feet for the shortest time possible.There are some who play in socks out of necessity due to severe neuropathy from diabetes; they can no longer feel the pedals through any sort of shoe sole, no matter how thin; when the toe studs are not pointy ones, this can work, and work well for them, but remains a special situation.Proper pedal technique as conventionally taught dictates that the player does NOT hit the natural pedal keys flat-footed but rather at a slight angle, which also works out much cleaner for those with very wide feet.It's generally agreed that most people can't really play pedals properly in street shoes or when barefoot, that it's possible but has the player at a disadvantage in that everything in organ playing is balance, that the right footwear is part of that balance [See blog, Balance In Organ Playing, Part I}, that by having an elevated heel there is less ankle movement, heel to toe, in scalar passages which translates into speed, and that it also permits stepping across an intervening pedal key to play thirds with the same foot.The anti-shoe brigade however remains in full force, and in recent years our generation of young people have been conditioned to be militantly anti-establishment, to be contrary to if not to deeply loathe academics and esteemed professionals -- thus it isn't surprising that refusing to wear organ shoes often rears its fashionable head these days.There may indeed be physiological and medical exceptions that militate against a musician wearing "proper" organ shoes, that does not overturn centuries of sensible, established practice.Those who aver however that "everybody else is wrong" will never have their thoughts rearranged; the academics meanwhile let them play in their bare footsies and sit on the sidelines to watch the careers of these sock-wearing organists skyrocket them to fame, fortune, envy, respect, and the status of "legend."In the end how well an organist observes balance determines how well they play, which is, of course, what matters.