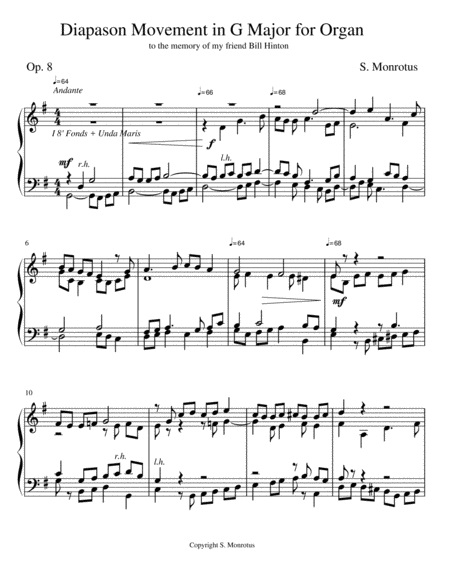 When you're writing a piece for organ, it doesn't have to be long and elaborate; some of the best gems in the literature are short.Once you have your theme and have it harmonized, additional melodic material is waiting for you inside your harmonization.All you have to do to find it is look inside what you've already written.Something new makes its appearance every time the theme, or portions of it, undergoes rhythmic transformation (same pitches in same order, but different note values) or when the other voices in the harmonization, or portions of them, are utilized as secondary themes or motives.Diapason Movement Op. 8 (photo) illustrates this.This piece is a completely self-contained prelude in G Major which can stand alone, and yet, it's only 32 measures long.Its theme is presented as a period at the outset consisting of 2 phrases of 4 measures each, harmonized in 4 parts.This theme first appears in the tenor voice, then, before it finishes, shifts position to the alto line, then to the soprano.This humble beginning provides the entire thematic material for the remainder of the piece.What follows is a short continuous expansion form, beginning on measure 8, which modulates to the relative key of e minor.The tune here originates as a rhythmic transformation of the first 2 measures of the theme.This material then modulates to the subdominant key of C Major, then to the dominant key of D Major where the theme itself is reiterated once, then modulates to the related key of b minor.At this point the tune originates from the tenor line of the harmony from measure 3 as a simple motive that's repeated in sequence through the next 4 measures, which modulates back to the subdominant key of C Major, an unexpected turn.Then, just as unexpectedly, a 2 voice imitation built upon the tenor line of the 2nd phrase of the theme is introduced between the outer voices with a quick modulation to the tonic key of G Major.This imitation in the tonic key is then repeated in reverse, with the follower becoming the leader.Having run its course, the work is then rounded off with a short coda, ending very peacefully and quietly over a tonic pedal point.When you're trying to expand the music you're writing, you don't have to look far to find additional material.Something interesting is already embedded inside what you have.You just need to know where to look for it.