Getting Started With Writing, Part II 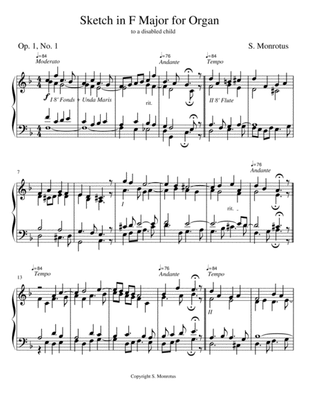 Having been motivated to do a little prior study of some of the methods Louis Vierne used as a composer [See menu bar, Bio, A Case Study] I decided one day to get up the nerve to sit down and try my hand at using a short 4 measure theme in F Major (one of many themes in various keys Vierne supplied to his pupils for free improvisation) as thematic material for something I myself would write.  At the outset I decided to 1) NOT invent my own free theme just yet, and 2) NOT to include a pedal part just yet, and I placed these 2 restrictions upon myself.

Using an online music writing application [Noteflight] I started with a blank score of 2 staves.  After I moved the mouse to copy Vierne's theme into the top line of the top staff [See Part I], added a bass line to the bottom line of the bottom staff, and finished filling in the two inner parts (tenor and alto) to complete a 4 part texture.  This yielded 4 measures of a completed thematic phrase in 4 parts, which I proceeded to save.  I tried to make each of the 4 voices in this phrase (including the bass) singable as an independent melodic line so that, when all 4 lines were played together, the effect would be satisfactory and smooth.  What I had at this point was just an insignificant core idea, a theme harmonized in 4 parts, a soul without a body, and at this moment in time it wasn't quite clear to me where I wanted to go with it.  But, typically, this is how art works.  And it was a start.  So far, so good.  I had something written down.  At that point I was interrupted to do my chores as a caregiver, and I had to break off working on it.

When I returned another day to continue working on it I couldn't help but think about how interruption, for a writer, means the temporary destruction of the imagination.  Too bad, I thought, that nobody ever tried to describe in musical terms what it's like to be interrupted when you're trying to create something.  Then, as I sat there, the thought hit me.  What if someone tried to describe in musical terms the starts and stops and contrasts involved with being interrupted all the time?   Granted, getting it all to adhere together would be tricky, but if no one ever tried to do it before, maybe it was time that someone did.  That was all it took.  I set to work.

So.  Having already a satisfactory 4 measure theme in 4 parts at hand to work with, I decided that the only thing left to do with this thematic phrase, beautiful in its own way, was to break it -- to interrupt it and deny it any time for development, block its forward movement, and bring it to an abrupt, deliberate, and premature halt.  This took some guts, it was a bold move to be sure, and it had me wondering how to proceed from there.  The music had just gotten launched and barely left the train station before it chugged to a stop.  This was its intended effect.  But ... NOW WHAT? ...

I wanted what followed to depict the intrusion of a frustrated, forced drudgery and yet have some connection to the theme.  This pointed to the need for a passage in a contrasting (minor) key, more somber and mundane sounding with a plodding rhythm and lighter registration alternating more than once with the theme, where these interrupting passages sort of dragged along.  I also wanted the ending to be on a positive, uplifting note, curtailed but with a certain charm.  The tone colors which suggested themselves in this scenario were soft 8-foot foundation tone for the thematic phrases, pure 8-foot Flute tone for the interrupting periods, and string Celeste tone reserved for the final phrase and codetta.

Having considered all of this I settled finally upon a form ... a sort of highly compressed rondo (ABACA) with a tag codetta.  After that, I settled upon where I would be harvesting the basic melodic contours for the 2 interrupting (B and C) sections.  The piece distilled down into 3 thematic phrases of 4 bars each harmonized in the major key and twice interrupted by contrasting periods of 8 measures in the minor key with the melody lines of the interrupting periods derived by taking both middle voices (alto and tenor) of the preceding A sections and splicing them together, end to end.  I went there in order to come up with deliberately bland, almost dull sounding lines while at the same time providing a sense of unity with the A sections.  For the sake of variety I made the decision to invert the theme in the second A section and to harmonize it chromatically in Vierne's manner when it reappeared, right side up, for the third and final time.

A stream of chords moving in parallel motion is called "planing;" chromatic planing happens when planing moves in half steps and is one of the compositional devices employed by Louis Vierne to vary the accompaniment.  It doesn't work in every situation, but wherever it can be applied to a diatonic melody as an alternate harmonization it can be very effective [See blog, Monotony, Marching, Your Ideas].  I used that same device here to chromatically harmonize the final statement of the A theme as it leads into the codetta.

The finished product which I named "Sketch in F major" was a curious little piece incorporating contrasting moods 32 bars long.  Its chief interest lies in the sense it gives of something promising being repeatedly interrrupted, encumbered, frustrated, and denied its full liberty and ability to develop, but emerging free and unencumbered, albeit curtailed, at the end.

The next thing that occured to me to do was to see if I could repeat the experiment and get this curious, fragile form of mine to hold together one more time.  I took another one of Vierne's free themes, this one in Bb Major, and proceeded to give it the same formal treatment save for the final statement of the theme where, instead of using planing to harmonize the melody I introduced a chromatically altered chord in the codetta (final tonic chord with a b5 and #5, both resolving to the 5th scale degree), another device favored by Vierne.  The result which I named "Sketch in Bb Major" was another curious little piece 33 measures long.  Having succeeded in giving life to both of these scores I grouped them together under Opus 1.

These 2 little pieces were the laboratories in which I began my earliest writing for the organ, and their themes which I borrowed from Vierne are capable of much greater elaboration than these 2 little Sketches made of them.  The approach I took in fact, in writing them, as I would later learn, had things backwards.  In both cases I attempted to force a theme into a preconceived abbreviated form rather than allowing the theme to determine the best form that brings out everything it has to offer.  As we work a theme, it occurs to us, as we go along, what form suits it best, and sometimes this makes us change course because it dawns on us that the form we first selected fails to bring out all it has to offer.  Most of the time, when we try to work things in reverse and settle on a form before we have a theme, we get frustrated and often quit trying to compose because we have so much trouble thinking up material that works with the form we've already made up our minds to employ.  It always works better to construct a form or corporeal body for the theme, which is the "soul" of the music, AFTER the theme is settled upon, instead of telling ourselves we're going to write a prelude, for example, and then sit there wondering where we're going to come up with the subject matter for that prelude.

Once we write a fugue, for example, and we want to pair it with a less strict work like a prelude, and we come up with a theme that looks like it will make a suitable prelude to match with the fugue, as we're working along its form comes into more tight focus, and it becomes obvious that we may not writing a prelude at all, but maybe a choral, an introduction, a toccata, a fantasia, or maybe even a praeludium (multi-sectional north German toccata) instead.  This is what makes writing our own music exciting.  Once we start working that theme we don't know precisely what the finished product will look like or even sound like until we begin constructing it.  Composers are builders constantly on a mission.  Whether they finish with a palace or a shack, a 4-room cottage or a 17-room mansion, depends upon the building materials they're using, or, in this case, the theme and the tools used to develop it.

Each of these 2 Sketches is a stand alone study in contrasts.  Each opening theme tries to bloom, then immediately has to stop and gets rudely interrupted by mundane, almost colorless passages that lead nowhere.  It's as if something trying to get somewhere isn't getting there, as if the bud trying to open is retarded by the next nightly cycle of cold.  That bud emerges finally to open for a brief moment at the end, then it ends almost abruptly and sounds like it's over with before it started.  We sense a work that represents a checkered pavement, part attraction and part distraction, part growing and part stunted.

These 2 Sketches can be expected to have an impact with some who can relate to what they're trying to say, and with others they may have little or no effect at all.  Some listeners may find them oddly interesting from the get go, some may have no opinion of them, and some may find them downright objectionable.  Some might even think they're awful.  And that's okay.  That's to be expected from all art.  If hearing this music causes anyone to reflect upon what it's trying to portray, then they'll probably draw some kind of connection and derive more enjoyment from them.  Knowing what Mona Lisa is smiling about has a lot to do with how she comes across as oil on canvas.

The point to be made here is that you can start with nothing but a single free theme (it could even be someones else's theme) and shine it through the prism of your own life's experiences to give it a shape [See blog, Prism, Getting Started With Writing, Parts VI, VII, X].  By doing this, a composer often can find beauty when they were told there was none.  And once they start to ignore the voice inside them that keeps telling them that they've never done anything like this before and they're no good at it, that they can't compose anything, to not even risk the embarassment, etc., etc., and they head directly into the winds of fear that's scaring them about it, the battle is won.  In so doing they beat this same voice at its own game by denying it the fear that fuels it.

The best guidance in the world is unproductive unless the person receiving that guidance has the guts to take action [See blog, It Takes Guts].