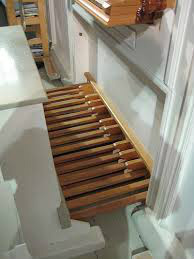 The pedaling method chosen, whether historically informed "toes only" or conventional "heel and toe," depends upon what type of instrument is at hand, where the player has just come from on the pedals, which pedal notes have to be played at the moment, where the feet will be going next, and what the hands are doing (See blog, Balance in Organ Playing, Part II).  Toes only technique would take precedence on a flat, non-radiating pedalboard as constructed in the style of early builders from the Baroque and Classical periods.  The historic Wender organ in Arnstadt upon which the young Bach performed (photo) is an example.  Its pedalboard compass is C1D1-C3D3, 25 notes with the top and bottom C# keys missing, which was common in those days.  The pedalboard was short, flat, non-radiating, and recessed slightly under the manuals, which made it mostly geared to toes only technique where some use of the heel was possible (See blog, Bach d minor, Part IV).

It helps to catch yourself as to whether you're playing with the inside or the outside portion of your foot.  Generally the inside of the foot (knees facing inward) is more reliable when it comes to feeling the pedalboard and hitting the right notes.  There are instances when sliding to the outside of the foot becomes necessary, but these occurences are relatively rare.  It also helps to practice pedal preparation with both feet, in this manner:  As soon as your foot releases one pedal, you instantly slide it, with one swift motion, to the next position for that foot and let it wait for its turn to play.  Generally the heels should remain together when playing intervals up through and including the 5th, the knees should be kept together when playing intervals up through and including the octave, and the pedals should be depressed using the inside of the foot, i.e. by aiming at the key with the big toe and centering the weight of the ball of the foot on it.  This derives from the fact that, with heels touching, the widest separation of the toes gives the 5th, and with knees together the widest separation of the feet gives the octave.  Generally, when having to reach pedals at either extreme end of the pedalboard it's helpful, while holding down a pedal note, to separate the knees and push off in the direction from the last pedal key played, which will have the knees pointing in the proper direction.  When a decision is made never to use the heels, the outside of the foot must be brought into service when one foot crosses behind the other in scalar passages.  The human feet, ankles, and legs, without the benefit of the heels, simply cannot position themselves to execute these types of passages any other way.

In the beginning a student staring at the pedalboard and eager to employ the rules of pedal playing can get so fixated upon them that, at times, it can be difficult to imagine either music or enjoyment coming out on either end.  It's important to remember that rules are there not to be your taskmasters but to guide you and serve you as part of the whole purpose of education, which is to make things easier.  Pedalboards vary widely, as do organists' anatomy.  What a 6 foot, 8 inch "daddy long legs" can manage on the pedalboard might have no bearing at all upon what a 5 foot, 2 inch organist can manage.  The same applies to players blessed with large hands as opposed to those with small hands.  Players may also have to approach the pedals differently due to injuries or other medical problems.  For example, in 1906, after Louis Vierne accidentally fell into a hole in a Paris street and broke his right leg, the resulting stiffness in the ankle after his leg mended forced him to completely relearn his pedal technique.  This relearning of his wasn't a matter of departure from the "one correct way" of pedal playing he learned from Widor but simply adapting his way of working to fit his physical situation.  Rules have come about from what gives the best results for the majority of players over time, generation after generation.  If you happen to discover that the rule isn't working in your case for some reason, you need to experiment to see if there's a way around it that gives better results for you.  When you find it, this becomes the rule for you, and you then stick with that.  Your goal is not to see how well you can follow some system of rules to the letter but to play the organ.  In order to do this you need to let go of that perfection thing with rules and free yourself up to play.  Every world class musician learned to perform, write, and teach by getting over their fear of the rules.  As Richard Branson rightly pointed out, you don't learn to walk by following rules; you learn by doing, and by falling over.

A stubborn insistence on always doing things only one way can, at times, be worse than a waste of time, especially if you're a teacher.  Writers know that not every idea fits the same classroom style "Roman numeral I and II" outline.  Zookeepers understand that not every bird thrives in captivity on the same food.  Even little children at play figure out that not every peg in their playschool peg set fits the same square hole.  For example, if you're extremely short in stature, have your bench fastened down to suit yourself, and are giving lessons from it, you can't insist that the bench is "fine where it is."  You can't insist that your pupils 6 feet tall keep their knees together on this bench.  You're asking them to do the impossible.  The bench will have to be moved backward far enough to allow their legs freedom of movement.  Differences like this are real and demand to be accomodated.

When everything else in the real world demands adaptation to prevailing conditions there's no reason to conclude that playing the pedals of an organ is somehow exempt.  The fact of the matter is, there's no single absolute way to play the pedals.  This may confound the acolytes of strict rule observance, but the fact is, one size or approach does not fit all.  No rule in organ playing is ever "absolute."  There is no such word in the glossary of organ playing.

The great 19th century piano teacher Theodore Leschetizsky ought to be the model in this respect.  He studied the individuality of his piano pupil, taught him according to that individuality, discussed what this or that sort of hand should do, and why another kind of hand should be held differently or be required to do otherwise.  He made it very plain that he had no fixed method in the ordinary sense of the word, but, at the same time, he showed the pupil how to produce the effects the composition demanded.  Some of the best advice we can receive is to get back to concentrating on the music, discover where and how that music might lead the feet, and then do that which comes naturally.  During pedal solos there's nothing inherently wrong or incorrect about whether the hands are placed on the bench, on the key cheeks of the bottom manual, or in the lap so long as it helps to maintain balance.  When it comes to correct pedal technique there are a lot of arbitrary opinions in circulation.  What works fine for one performer may not necessarily work as well for another.  Each player finds what works best for themselves.  The technical purists may disagree with this "heresy," but when it comes to playing the pedals, Rule Number One is:  Let the music lead the performer; the music will tell the feet what to do.  Each composition is different (See blog, Balance in Organ Playing, Part II).

There are plenty of good books available for developing a solid mastery of pedal playing.  Among these are Harold Gleason's Method of Organ Playing, Roger Davis' The Organists Manual, and Marcel Dupre's Methode d'Orgue.  Richard Enright, in his Fundamentals of Organ Playing, Two Practices, covers both the Baroque method of toes only and the legato school heel and toe methods.  Other excellent references are Rowland Dunham's Pedal Mastery:  A Manual for Organists and Joyce Jones' Pedal Mastery for Organ.

The book this author's teachers recommended for learning the pedals, and the one from which he worked, was A System of Technical Studies in Pedal Playing by Lars Nilson.  Working from this book gave one a very solid foundation in heel and toe pedal playing.  If one could have only one book from which to learn the pedals, this is it.

Initially, many organists embrace the ideal that the feet should never cross, but as they learn a broader repertoire and look into various styles or techniques of pedal playing they often moderate their initial position.  This is a case, again, where one size does not fit all.  There are some sets of scales/exercises which do teach foot crossings but with a set of rules to be applied as to how and when crossings are to be utilized.  Most notable of these are Dupre's Gammes de pedale and the pedal scales taught by Louis Robert.

The so-called Virgil Fox Method is based upon the piano technique of Theodore Leschetizsky adopted by Wilhelm Middelschulte, German organist and composer with whom Virgil studied in Chicago, and the pedal technique of Louis Robert, famed Dutch organist and Virgil's teacher at Peabody Conservatory.  Virgil also studied briefly with Dupre in Paris but stayed with the Robert pedal scales and used them when teaching his own few pupils.  The Louis Robert/Virgil Fox pedal scales are available in the book Virgil Fox:  The Innermost Secrets written by Virgil's pupil, T. Ernest Nichols.  It analyzes in great detail the method of practicing that Fox used and taught.  The Robert pedal scales are extremely annoying to play at first, but once they get comfortable in the feet they're purported to be a joy to play.  The discussion of the anatomical aspects of organ playing in this book will be found quite useful.  The Fox Method is reported to have helped many in learning to practice, learning new repertoire, and memorizing new pieces.