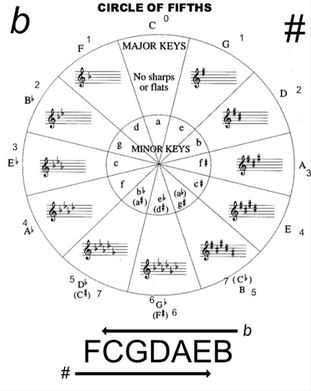 Curiously, with very few exceptions, the radical change adopted around 1700 to writing in all keys was not generally adopted in North Germany.  When the range of modulation of the North German organ repertoire is examined, it's only in the works of Luebeck, Bruhns, and Buxtehude that the limits imposed by quarter comma meantone are exceeded.  The well tempered systems of temperament were generally rejected there until around the middle of the 18th century, hence, the avant garde free works of the late 17th century North German organ school could not continue to evolve there.  Instead this tradition was carried on elsewhere in central Germany, but even there, resistance to the abandonment of meantone was encountered.  Gottfried Silbermann, for example, could not bring himself to use well temperaments in his organs and clung to sixth-comma meantone (See blog, Temperaments and Tuning, Part IV).

J.S. Bach was among the first composers of first rate organ music to be trained by a generation of musicians raised in the modified meantone tradition but who had access to organs being tuned in the newer well temperaments.  From the beginning of his career as a professional organist at the age of 18 he presided at Arnstadt over a completely new, 21 stop Wender organ tuned in a well temperament.  History shows, and every organist quickly comes to realize, that this spirited young fellow (photo) was a comprehensive genius are arguably the greatest musician this world has ever seen.  Every composer today owes something to him, and every composer before him merely led up to him.  Whenever the music in his mind demanded a triad on Db, F#, Ab, or B the instrument in front of him tuned in quarter comma meantone would not accomodate it.  And yet, Bach did not at any time favor or advocate the use of equal temperament.  In writing his 2 sets of preludes and fugues in all major and minor keys which he called "Das Wohltemperierte Klavier" he avoided using the German term for equal temperament, which is "Gleich-Schwebende Temperatur."  These 48 pieces were designed to exhibit the full range of key color available from an irregular, circular temperament, and careful examination of the text reveals that Bach varied his compositional technique according to the key in which he was writing.  These 2 collections demonstrated that keyboad music could be played in all 24 keys on instruments tuned in an irregular, circular temperament, and that such a keyboard, a well-tempered keyboard, was an unrestricted one.

The value of a composition's key signature is high in these temperaments as it affects the color of all the intervals.  All of the rest of Bach's music falls into the more conventional patterns of the day, most of it being playable in modified meantone, even if it pushes the boundaries of it.  It's particularly noticeable in his organ music that Bach uses modulation as an expressive device and dares to use the highly colored remote keys for periods of tension.  Today, with our 21st century minds and ears, we often wonder how 17th and 18th century players could stand playing long pieces without changing the stops more frequently.  The answer is that in the days of Bach the modulation from one key to another during the course of the music was an audible "event," a noticeable change which rendered frequent registration changes unnecessary.  When Bach plunges from a passage in the home key into a section of wild dissonance peppered with suspensions and discords, he's deliberately invoking the color effects obtainable from a well temperament, NOT equal temperament.  Despite Bach's jokes at Silbermann's expense (Silbermann invariably tuned his instruments in sixth comma meantone, and Bach is reported to have tested his organs in outlandish keys until the builder was forced to retire "with his wolf howling in his ears"), Bach's keyboard music is nevertheless centered around the meantone tradition and the many color effects is offers.

One wonders then, with the wolf ready to howl any moment at the door, how meantone forms could have held sway over all other temperaments for nearly 400 years.  When a genre of composition especially suited to meantone, such as the English Trumpet Voluntary, is considered, the answer becomes plain.  Playing such a piece on equal temperament sounds uniformly dull by comparison, the acid whining of equally tempered 3rds and 6ths being less than harmonious to the ear accustomed to meantone.  When played in meantone however, quite a different picture emerges.  The half steps of the scale are all of different sizes, and the chromatic scale, far from being smooth and oily, becomes a bumpy, eccentric, and challenging affair.  The harmony it brings with it displays rapid, even kaleidoscopic, change of key color through constant modulation, and the repeated build-up and release of harmonic tension is characteristic and fascinating.

By the mid-19th century harmonies were getting progressively thicker, and string and vocal vibrati were getting wider, which reduced or eliminated the audibility of the beats in the various intervals.  Since these nuances were disappearing in currently composed music, the pressure to adopt a tempering standard increased.  The easiest standard was to equally temper ALL 5ths so that the comma was equally shared around the entire Circle.  By the late 19th century standard European 1/12 (Pythagorean) comma equal temperament, the only practical temperament for the modern piano or organ, had wholly extinguished its predescessor, meantone, which was hopelessly dissonant in at least half the chord formations of modern music.

The term "enharmonic" is derived from the ancient Greek language in which it signified a progression by quarter tones.  Nowadays this term means the succession of 2 tones nearly alike to the ear, but differently written and sounded by only one key on the piano or organ.  There is, however, a real difference between 2 such tones as C# and Db.  These 2 notes sound the same on the piano or organ because the whole step has been divided by the modern equally tempered scale system.  But on an instrument like the violin, the musician with an acute ear will make a slight difference.