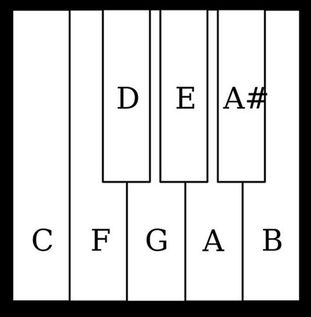 As explained earlier, the ear cannot tolerate the entire Syntonic comma of 22 cents, and it has to be divided up somehow.  In standard quarter-comma meantone the Syntonic comma is distributed equally among the 4 major 3rds built upon Db, F#, Ab, and B at the bottom of the Circle.  The 4 "wolf" intervals thus created eventually became so annoying that, by the late 17th century, meantone tuning was being modified substantially in practice.  Simply put, the 8 purest major 3rds were tuned very slightly away from pure in order to try to lessen the extreme nastiness of these 4 wolf intervals.  The result was 8 usable major thirds at Eb-G / Bb-D / F-A/ C-E / G-B / D-F# / A-C# / E-G# -- 4  unusuable major thirds (diminished fourths) at B-D# / F#-A# / C#-E# / Ab-C -- 1 very dissonant and nasty extended fifth known as "the wolf" at Ab-Eb -- a highly irregular chromatic scale (meaning that chromatic compositions were given a very distinctive voice) -- and only 10 usable keys at C Major-a minor / D Major-b minor / GMajor-e minor / A Major-f# minor / Bb Major-g minor.

In 16th century German organs tuned in quarter comma meantone, where half of the triads of modern music could not be used, organ builders developed the short octave, which was a special means of extending the lower compass of the keyboards by eliminating those keys for notes could seldom, if ever, be used in meantone tuning.  The bass octave of the manuals was built to end on the the white E key (photo), and this key played C.  The low F# and low G# keys in the bass octave played D and E, respectively.  In this arrangement the pipes which were supposed to play C#, D#, F#, and G# notes in this octave were omitted entirely [See blog, Renaissance Style Manual].

The pedalboards provided were all flat and non-radiating with a short octave in the bottom and a broken octave with split sharps in midrange [See blog, Renaissance Style Pedalboard].  The bottom octave of the pedals ended on the white key D, and this key played C.  The next white key was F, and the intervening black key played D.  In midrange split sharps were provided on Eb and G#.  The front black key at Eb was Eb.  The back black at Eb was D#.  The front black key at G# was G#.  The back black key at G# was Ab.

NOTE:  These split sharps, or subsemitones, involved certain black keys, each of which was provided with a shorter back portion placed slightly above and in back of the front portion.  Using a short or broken octave manual music written with two or three sharps or flats would play in tune, and intervals in the bass as wide as a 10th could be easily reached by players with smaller hands.

In an attempt to better hide the wolves a modified temperament based upon standard (quarter-comma) meantone developed in France during the late 17th century.  This was called Chaumont temperament and was based upon 6 pure major 3rds (D-F#, E-G#, F-A, G-B, A-C#, C-E, the last one being slightly diminished).  This kept most of the old meantone sound while achieving an expanded, but not unlimited, modulation scope and enharmonic capability.

Around the same time in Germany organ builders were experimenting and using various irregular or circular temperaments, also known as well temperaments, with the object of hiding the wolves completely, thereby making all keys usuable.  This could have be done by distributing the Pythagorean comma equally across the entire scale, but this was NOT the path the Germans took, except as an academic exercise.  The reason was, the circulating (no-wolf) temperaments are those which allow the widest exploration of key color, and so, the Pythagorean comma was distributed around the entire circle in an irregular manner.  Well temperaments in this category included various tunings.  Werckmeister temperament, invented by organist and music theorist Andreas Werckmeister, is recommended for performing German organ repertoire of the late 1600's.  Kirnberger temperament, developed by Johann Philipp Kirnberger, pupil of J.S. Bach, is suitable for playing the German Baroque composers and the works of Bach.  Kellner temperament, is named after Herbert Anton Kellner, whose research enabled him to identify the unequal temperament of the same name used by Bach for his Well-Tempered Klavier, Books I and II, and is therefore suitable for 18th century German organ music and the music of Bach in particular.  Valloti temperament is an Italian temperament first invented by Francescantonio Valloti and later taken up in England by Thomas Young, which can be effectively used for Italian and English repertoire of the 18th century.

In all these circular systems it is possible to play in any key, though the more remote keys may sound a bit unpleasant, and enharmonic modulation is not always happy.  Werckmeister, for example, is notable for its purity in the best keys and its suitability for organs with large quint mixtures (many of the perfect 4ths and 5ths are in tune), but it's irregular and bumpy in the way it deals with modulation and key color.  Most keys however are better than with equal temperament, with only the most remote keys at the bottom of the Circle being slightly worse.  The actual pitches are very close to equal temperament.  There are NO wolf intervals to greatly insult the ear, and the unevenness of the chromatic scale is not apparent.  Except for the omission of the low C# key, which was almost universal in those days, the bass octaves of early organs tuned in a well temperament were usually made fully chromatic and not the short octave found in so many organs of preceding generations (See blog, Bach d minor, Part IV).