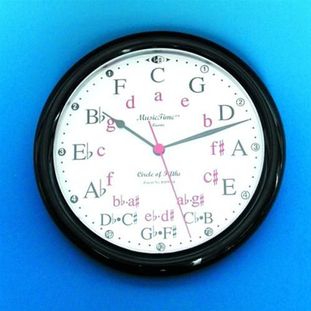 If we were to arrange all 12 chromatic semitones in the octave in a circle with each note corresponding with the 12 hours on a clock face and the note C stationed at the 12 o'clock position, then take a careful look at the chromatic keyboard, it will be seen that beginning with any note C on that keyboard the sharp keys make an asscending progression clockwise in intervals of perfect 5ths, and the flat keys make an ascending progression in perfect 4ths.  When these intervallic relationships are positioned on the clock face, we arrive at a series of dominants when moving around the clock in one direction and a series of subdominants when moving around the clock in the other direction.   it is entirely arbitrary whether perfect 5ths or perfect 4ths are assigned the clockwise direction.  This is often described as the so-called Circle of 5ths, Circle of 4ths, Musical Clock, or just Circle (photo).  The 3 overlapping keys at the bottom of the Circle are said to be enharmonic in the tempered scale system, the choice between one of each pair being a matter of convenience.  The keys immediately adjacent to, and on each side of, any given note in the Circle are said to be related, and modulations to and from these keys are easily and frequently made.  The remaining keys are termed unrelated keys.

We find that the interval of a perfect 5th can be tuned mathematically pure in a ratio of 3:2, but when we try to apply that to the whole Circle we unearth a problem:  Beginning at the bottom C1 (16-foot C) of the piano keyboard, if we travel clockwise once around the entire Circle through a succession of 12 perfect 5ths each tuned in the pure ratio of 3:2 we find that we end up 7 octaves away on a C8 which is NOT quite in tune with bottom C1 where we started, a mathematial anomaly.  A circle of 12 perfect 5ths (702 X 12) contains 8424 cents.  With each perfect 5th in the Circle tune pure, the Circle winds up being about 24 cents too wide to squeeze itself into a distance of 7 octaves.  This discrepancy of about 24 cents is known as the ditonic comma, or Pythagorean comma.  The same sort of anomaly results from superimposing 6 pure major 2nds (204 X 6) in consecutive sequence.  They're slightly too large, by about 24 cents, for all 6 of them (1224 cents) to fit inside an octave's distance.

Another mathematical anomaly can be discovered by tuning intervals pure.  Two octaves (2400 cents) plus a major 3rd (386 cents) cover a distance of 2738 cents, but 4 consecutive pure perfect 5ths (702 X 4) occupy 2808 cents.  The 4 superimposed perfect 5ths, which tuned pure, are very slightly more than 22 cents too wide to fit within 2 octaves plus a major 3rd.  This discrepancy of about 22 cents is called the Syntonic comma, and the mathematical difference between the values of the Pythagorean comma and Syntonic comma, which amounts to very nearly 2 cents, is called the Schisma.

The word "enharmonic," now, means the succession of 2 notes nearly alike to the ear, but differently written and sounded by only one key on the piano or organ.  There is, however, a real difference between 2 such notes, for example, between C# and Db.

These 2 notes sound the same on the piano or organ because the whole step has been divided equally by the tempered scale system.  But on a violin, the musician with an acute ear will make a slight difference.

In superimposing these 4 perfect 5ths tuned pure, the highest note at the top will form an offensively sharp (by the Syntonic comma) major 3rd (a so-called Pythagorean major 3rd) with the super octave note correctly tuned to the starting note.  Accordingly, it becomes necessary to find a way to flatten each successive perfect 5th away from pure by a few cents sufficiently enough to render this Pythagorean major 3rd approximately perfect, or more correctly speaking, only somewhat sharper than perfect.

Organ builders have developed various methods over the centuries for eliminating, accomodating, or hiding these commas with the goal of making a performance of music in most, if not all, keys inoffensive to the ear.  This process is called tempering and is the correct term to use when interval sizes within the octave are adjusted away from pure.

A pure major 3rd rounded to 386 cents is actually closer to 386.3 cents.  When 3 of these pure major thirds are superimposed (386.3 X 3) they only cover about 1159 cents and are too small to stretch themselves across an octave's distance.  They're too narrow by about 41 cents, nearly half a semitone flat.  This shortfall, which is very nearly the size of a pure diminished 2nd, but not quite, is known at the Diesis.  Theoretically, to get any 3 superimposed major 3rds to fit within the octave, each would have to be stretched, or sharpened, by nearly 14 cents, or 1/3 of the Diesis, away from pure.

A pure minor 3rd rounded to 316 cents is actually closer to 315.6 cents.  When 4 of these pure minor 3rds are superimposed (315.6 X 4) they cover about 1261 cents and are too big to squeeze themselves within the octave.  They're wider than an octave by about 62 cents, nearly half a chromatic semitone sharp.  Theoretically, to get any 4 superimposed minor 3rds to fit within the octave, each would have to be compressed, or flattened, by nearly 16 cents away from pure to the extent demanded by the perfect adjustment of the octave.

This shows that if perfect 5ths are tuned pure, the major 3rds that result will be insufferably sharp and of no use in harmony.  But, then again, if the perfect 5ths are so mistuned or tempered as to bring the major 3rds pure, the perfect 5ths that result will be too flat for use in harmony.  Thus, in being faced with squeezing the Circle into 7 octaves and getting major 3rds and perfect 5ths to sound in tune with octaves, a system of temperament must be adopted to render all intervals agreeable to the ear.  In equal temperament the octave is divided into 12 equal steps separated by exactly the same distance in order to resolve the issue.

Most organ students are told very early in their training that notes with enharmonic names are the same pitch.  In theory this is true only in equal temperament.  For example, taking the value of a pure major 3rd from C to E as 386.3 cents, and the major 3rd from E to G# as 386.3 cents, to complete the octave we would only have to add a pure diminished 4th (which is closer to 427.4 cents) from Ab to C to equal 1200 cents, the octave.  So, by changing the G# to an Ab, we make the last interval a diminished 4th rather than a major 3rd, which completes the octave.  Therefore the black key G#/Ab on the keyboard must be tuned either to G# or Ab, or tempered to serve as both.

In equal temperament every perfect 5th is slightly flattened away from pure by about 2 cents, and every perfect 4th is slightly sharpened away from pure by about 2 cents.  In the middle C4 octave these 2-cent deviations cause perfect 4ths and perfect 5ths to beat at approximately 1 beat per second, which is not terribly noticeable to the ear.  But equally tempered 3rds create a great amount of tension, as every minor 3rd is pinched closed by nearly 16 cents, and every major 3rd is wedged open by nearly 14 cents.  This results in high beat rates of around 10 beats per second.  The high beat rates of the 3rds clash with the slow beat rate of the 5ths, creating a very "buzzy" triad.  With minor 3rds and perfect 5ths compressed and major 3rds and perfect 4ths stretched there is audible beating between sustained pitches, but no interval is rendered so flat or so sharp as to be unsuitable in harmony or truly objectionable to the ear,  the modern ear, that is -- one that has been awash in equal tempered intervals for well over a century and has grown up in a culture desensitized to them, not really noticing how bad its major and minor 3rds sound.  The advantage of this compromise seems quite obvious, that all keys are usable without fear or favor, and full enharmonic modulation is possible.  Any music can be transposed to any key.  The disadvantage is also obvious.  Not one interval is dead in tune.  Every key is as in, or out of, tune as any other.  With its bland equal spacing of 12 pitches to the octave, there is no key color whatever.  Any feeling of change in moving from one key to the next, where the listener has a sense of specific, visceral feel for where they are on the pitch map, disappears.

Other tempering schemes have been advocated over the centuries and number well over a hundred, with probably no more than 20 or so being practical for general use.  Of these, the list of useful temperaments for historically informed performance of Western music from the Middle Ages to the present contains less than 10 schemes, with only one, equal temperament, being practical for the standard keyboard instrument of today having 12 chromatic semitones to the octave.