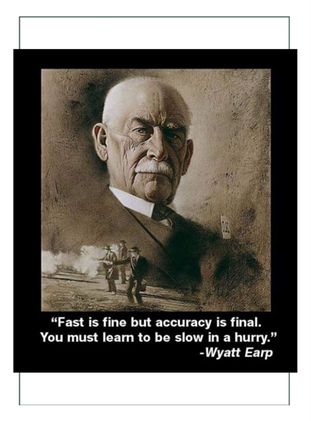 The new organist needs to consider the role of the piano in this study, give some attention to those things which will carry over (sight reading, scales, arpeggios, stretch exercises, etc.), but also be cautious when coming to the organ about certain aspects of this transfer, such as varying rhythm for the sake of expression.  At the piano a liberal use of tempo rubato, i.e. elasticity or expressional fluctuations of tempo not indicated by the notation (involving a slight dwelling upon what would be the accented notes) works beautifully, but it doesn't transfer quite so easily to the organ.  Extra care needs to be exercised on the organ that any modifications of the time are so small as to not destroy or obscure the sense of rhythm.  Every student of the Arts must first learn to draw a straight line before he or she can draw a good curve, and, like a straight line, a solid rhythmic pulse is the primary means by which an organist holds the listener's attention.  The listener comes under the spell of this hypnotic pulse.

The listener's mind, yours and mine, seeks a clear beat, and the ear follows music best which maintains its own rhythmic framework best.  Continual fluctuations in tempo by getting ahead of where the beat would fall, then dropping back to something less than tempo, has a tendency to lose and even annoy the listener.  This is not to say that tempo rubato should never be used at the organ.  It's a fundamental element of Romantic performance style as well as theatre organ styling and performing orchestral transcriptions, but its use should be well thought out in advance and never be overdone.  If a piece, for example, in 3-part (ABA) form begins in slow tempo and leads into a middle (B) section marked "Animato," the player can move into the tempo, but it the tempo is almost doubled it wouldn't be in good architectural context for the rhythm.  The player should keep the second tempo in context, change the sound a little, make it fit into ratio, and gently nudge it along.  If these kinds of passages are hurried the listener will miss the beautiful cohesion of the harmonies, how they move around, when things go by so fast.

There's a clear difference between the exercise of real professionalism here and a ridiculous show that leaves the music barely recognizable and the listener annoyed by its decadence.  In this day and age what used to be called Art has become entertainment and seems to be no longer subject to any restrictions.  In the world of organ performance, any sort of outrage which repackages a preexistent written work into something new has become acceptable Art.  Many a composer's music has been transformed into a grotesque caricature of its true self, even a ludicrous circus act in some cases, under the pretext of taking a chancy stab at making it sound "more interesting" using, among other things, incessant broad swings in timing.  This is a fad common only to a very small handful of well known organists and the small army of identical clones among their followers, a fad that will, in time, run its course and reach a dead end.  When performing any well known piece, the idea is to play it so that people recognize it as the composer's music, not as an improvisation or commentary on the original with a few of the composer's own embellishments thrown in for good measure.

Youthful enthusiasm and performance anxiety have a tendency to produce faster starting tempos.  To compensate for this, especially with highly polyphonic music such as a Bach fugue, it may prove helpful to form the habit of settling on a slightly slower concert tempo than what seems demanded.  It may also help to keep in mind that the fastest thing around in Bach's day was a horse and buggy, not a rocket.  After settling on a beginning registration, it would be beneficial to pause briefly for a few seconds to mentally gauge the starting tempo and the general mood of the hymn, anthem, or composition to be played.  Focusing the concentration this way has a calming influence which helps to block out distrations and reduce anxiety.

If excitement causes the player to get a little ahead of where the beat would fall and the listener fails to find a clear beat, many times its in manual passages, and they start to pull ahead.  Players need to be cautious that the inner parts (tenor and alto) of fugues stay focused and in a kind of rhythmic framework that allows for stretching, subtle nuance, but not something where the framework is not kept with it [see blog, Scorched Ears, Widor 5 Toccata, Part I].