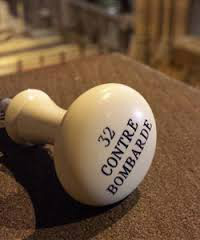 When organ stops are selected and combined for the purpose of ensemble building care must be taken that the result is balanced both above and below the unison pitch of the division.  When the upperwork must be drawn in building the principal chorus, for example, the organist should first consider the volume of tone produced by the unison stop forming the foundation of the chorus.  The Octave stop added should be strictly subordinate in strength of tone to the unison stop.  If the Octave stop is very keen, then perhaps another unison "helper" stop with good blending qualities should be added to the mix to balance the unduly assertive Octave.  Or perhaps it would be better to choose a different Octave stop in the first place, one voiced less assertive in strength.  The Super-Octave voice, in its turn, should be strictly subordinate in strength of tone to the Octave stop used in the chorus.  If it happens to be very penetrating, then a softer Super-Octave voice or the most softly voiced Mixture stop in the organ may be substituted with better effect when the chorus is first brought on.  The Quint, or Twelfth, if not too assertive, might with advantage be drawn before the Super-Octave or Mixture, rather than after.

In Anglo-American organs it can happen that if the 1st Open Diapason is too big, if the Octave is too keen, and the Super-Octave too penetrating, the Great Principal chorus composed of these three stops swamps everything else in the buildup to full organ.  The 2nd Open Diapason, which is supposed to be of smaller scale and brighter in tone, may also lack the requisite qualities.  Sometimes the 3rd Open Diapason is still no good, to where a full voiced Violin Diapason (Geigenprincipal), Gemshorn, or Salicional may have to be tried to find a better unison upon which to build the primary chorus.  Experimentation is required, and, as always, the ear should be the final judge.  The result in each case should be a plenum that is in equilibrium with itself and to which the ear can listen for prolonged periods without getting tired.  Mixtures containing 3rd sounding ranks should not be included in the plenum, as violent false relations are the result when intervals of minor 3rds are played.  Rapid passages when registered this way on an electronic instrument with poor tone could end up sounding like a duck giving birth to barbed wire.

Whenever the first unison reed stop is added to the principal chorus it should not be too assertive in quality and strength of tone.  The organist might consider drawing it with the Twelfth, if this stop is not too assertive.  This will help bring on the reeds in a gradual buildup.  The unison reed usually provided to the Great division is a large scale, loudly voiced Trumpet mated in quality and strength to the 1st Open Diapason, and therefore of more use in a solo capacity than in ensemble.  If a suboctave reed is not provided to the Great division, one is usually available on a secondary manual which may be coupled to the Great for providing the fullest of effects.  At the moment it's coupled to the Great it's helpful to add some additional unison reed tone from the secondary manuals at the same time, or perhaps adding that penetrating Super Octave stop on the Great at the same time.  When stops are being subtracted from an ensemble the same principles apply in reverse order.  As suboctave stops are retired some upperwork should be retired at the same time.  As Octave stops are retired some additional unison stops are retired as well, to preserve balance.

How an organist uses the pedals is balance.  When a pedal solo is written into the music the natural counterbalance of the manual keys pushing against the body is removed.  Both idle hands in this case should be place upon the key cheeks of the first manual or on the bench to provide the counterbalance.  Generally when the toes play the organist can lean into the foot more, and it helps to hold the body's balance.  The choice of heel or toe depends upon what's going on with the hands at the time and the effect on the overall fulcrum, i.e. the coordination of the whole body.  As a result, the heel and toe indications in a passage from one piece, though the notes may be identical somewhere else in the piece or in some other piece, may not apply there.  The premise may be good (of playing identical note patterns identically each time they're encountered), but when the hands are playing, balance is the most important consideration.

No rule in organ playing is ever "absolute."  There is no such word in the glossary of organ playing.  It's all relative to how it works with balance and fulcrum, and what works in one application often does not work in another.  It's a matter of the organist using his/her senses to see if the balance is as solid as it should be.  There's a smoother way to do it with both pedalings and fingerings.  Both are extremely important, and finally, the ear has to be listening to everything.

How far an organist sight reads ahead is balance [See blog, Sight Reading, Parts I,II].  Poor sight reading proceeds only a beat at a time.  It's necessary that the player read ahead of where they're playing, but if we read too far ahead the memory will be taxed simply to remember what's just been read.  Then again, if we don't read far enough ahead, our processing time is reduced.  Some experimentation is required, but generally, for moderately quick tempos, if we form the habit of reading 2 beats ahead we can arrive at an equilibrium between taxing the memory and having sufficient processing time.