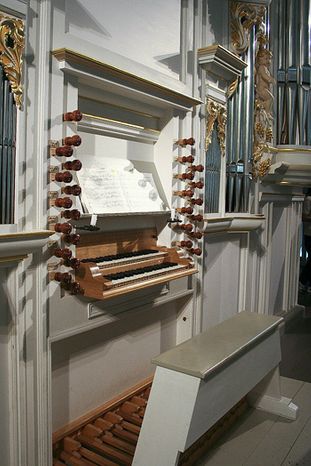 The new 2 manual, 21 stop organ built in 1703 by Johann Friedrich Wender for the Neuekirche (now Bachkirche) in Arnstadt (photo) over which the young Bach, beginning at 18 years of age, was the first organist to preside, an instrument which was brand new and very modern for its day, could not fail to exert its influence upon the teenage composer's ideas about playing technique, registrations, and the writing of his early organ works, including this one, for the next 4 years.  This is a work which would have drawn the most out of this or any other new instrument, and hearing it performed for the first time must have created quite a stir in this little town.  Notwithstanding the Fugue's tonal answer which exchanges the more usual tonic-dominant tension in the exposition for the tonic-subdominant, and notwithstanding the hidden fifths (measures 40-42 and 53) which follow, the writing is more imaginative, bold, fiery, and majestic, by far, than any organ writing up until then.  In its inspiration it far exceeded the resources of any organ at which JSB ever enjoyed regular access.

The original Wender key desk is on display in the Bach museum and is striking in its stark simplicity.  Because its been badly damaged during its history and no one is presently allowed to use it, it was measured precisely and an exact replica down to the last millimeter and detail was constructed by the firm of Otto Hoffman of Ostheim/Rhon.  Dedicated with its new key desk in 2000, this historic, world famous instrument was restored to its original high church pitch with A tuned to 465 based upon the pitch of the original 8-foot Gemshorn pipes in the main (Oberwerk) division.  Since this is 96 cents (very nearly one equally tempered semitone) higher than the 440 standard, transposition of the d minor Toccata up one half step to e flat minor would provide a better representation of the actual pitches the Arnstadt listeners heard.  On modern instruments tuned in all-keys-the-same equal temperament this can be done easily and electronically without any sacrifice of artistic integrity.

Wender installed the organ very high in the building, in the third floor balcony directly under the vaulted ceiling, and the limited height and space of that place dictated that no 16-foot manual stops could be included.  In their place a 5-1/3 foot Quinta stop was supplied to the main (Oberwerk) division for the purpose of generating a differential "synthetic" 16-foot tone when drawn with the plenum of the Oberwerk.  This helps to explain the unusual octave doublings in the opening of the Toccata for which there is no parallel in any other of Bach's organ music and reflects an ingenious solution for making up for that deficiency and creating an organo pleno sound that typically requires a 16-foot basis, The instrument also had no 2-foot stops.  This not only made them unavailable to the chorus but certain gap interval registrations common to neo-baroque music, like 8-foot with 2-foot, were impossible.  The surprisingly weighty and powerful secondary division (Brustwerk) was mounted to the sides of the Oberwerk and played from the bottom manual.  It was supplied with only one 8-foot stop, a covered flute labeled "Still Gedackt" which was topped by a 4-foot chorus.  The highest pitched single rank stop supplied to the Brustwerk was a 2-2/3 Quinta which, when drawn with the 4-foot chorus, served to strengthen and reinforce the sole 8-foot stop.  The Brustwerk mixture is of III ranks, and the Oberwerk mixture is of IV ranks.  The Pedal division is supplied with only 4 stops:  a 16-foot Gedackt labeled "Sub Bass," 8-foot "Principal Bass," 16-foot Trombone labeled "Posaunen Bass," and a 2-foot Zink labeled "Cornet Bass," the last two stops being reeds.  A shove coupler I/II and Oberwerk to Pedal coupler were the only two couplers supplied.  The Oberwerk lacked couplers on itself, and the Brustwerk could not be coupled to the Pedal.

These peculiarities not only force a consideration of registrations but also a reconsideration of Bach's performance pitch, at least for the early works.  I try to follow these considerations in the use of the manuals, selection of the stops, even to raising the pitch of the instrument one half step from the standard to e flat minor when the work is practiced.  On a larger instrument where it's possible to play with a larger sound, I also try to make an educated guess as to what additions or corrections the composer might have considered making in the selection of the stops, and go with that.  It's almost absurd to think that this genius Bach, who drew perhaps 8 stops on the Wender organ in Arnstadt to secure his plenum there, would have confined himself to only 8 stops to secure his plenum when seated at an instrument 3 times its size.

The compass of both manuals in the Hoffman restoration is CD2 to C6, 48 notes.  The bass octaves of both manuals were fully chromatic except for the missing low C#2, which was almost universal in those days.  The young Bach was free to use more remote keys and consequently would have been making more extensive use of the thumb on the Arnstadt organ than was previously thought.  This was due to the instrument being tuned in a then-modern well temperament instead of the quarter-comma meantone prevalent in many older organs of the time (see Temperaments, Part IV).  The pedalboard of the Hoffman restoration is fully chromatic with the exception of bottom C#1 and top C#3, and has a compass of CD1 to CD3, 24 notes.  The pedal keys, while shorter than modern ones, were flat, non-radiating, and recessed under the manuals a bit more than other organs being constructed in central Germany about the same time.  A narrow toeboard was also provided for the feet to perch upon when not playing the pedals.  This allowed for a more upright posture on the bench and the use of heels comfortably over the entire range of the Arnstadt pedalboard, which proves that Bach could have used heels at a very early period in his career as an organist, if he wanted [See blog, Heel Or Toe, Part II].  While this may contradict much of what has been said, written, and taught about early (toes only) pedal technique, the proof that Bach was not forced to generally abandon the use of heels in pedaling is sitting in Arnstadt for any interested organist to examine.

Looking at the score, every type of touch seems to be called for in the free opening which precedes the fugue.  This is a hint that Bach employed ALL types of touch in performing his own organ works.  It's helpful to bear in mind that tempos in the days of Bach had a narrower range than those of today.  Presto wasn't quite as fast, and Adagio was a bit faster, as what 21st century ears are accustomed to hearing.  We should remember that Bach's organ music needs time to breathe and sound with all its majesty.  Also, on the German organs of Bach's day the wind supply was at times a bit unstable, and it was impossible to play as fast as the hands could move without distorting the sound.  It follows therefore, that the tempo marks inserted by later copyists should be interpreted in the context of the passing of time and what the German organ of Bach's day could and could not do.  The 16th notes in passages marked Prestissimo or Presto should move quickly, but not insanely fast.  The 64th notes in the opening were marked Adagio by copyists to indicate that they are not to move as fast as the hands can play.  The passage marked Allegro is an indication that these notes are to be played very lively and evenly, and the staccato touch indications, even though they are probably later additions, seem made for them.

The interpreter should also be wary of inconsistencies in metronome markings appearing in published editions.  In the Dupre edition, for example, the metronomic indications for both the Fugue and for the passages marked Prestissimo in the free opening, as printed, are identical, which cannot be.  No Bach fugue is ever played at a Prestissimo tempo.  It's instructive in this connection to read Louis Vierne's essay about performing this work (see Appendix B of Rollin Smith's book, Louis Vierne, Organist of Notre-Dame Cathedral, Pendragon Press, 1999).  Because Dupre was of the legato school, and due to recent discoveries of the historical (non-legato, broken) manner of performing early (pre-1800) organ music with its deemphasis on thumb glissando, substitution, and use of the heels, Dupre's edition of Bach's organ works is not as widely consulted today as it once was.