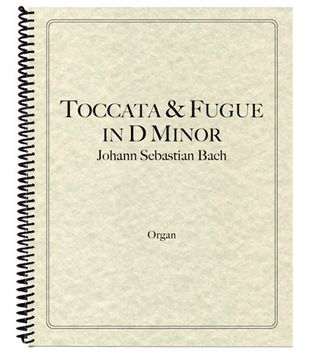 Peter Williams, in an exhaustive study of the organ works of Bach, makes the argument, based upon certain stylistic incongruities and clues in extant copies, that this well known work is a transcription, perhaps badly transmitted, of a solo unaccompanied violin sonata by a composer from the generation following Bach, possibly by Kellner or some other musician with close ties to Bach.  Williams' views, while shocking when first published (Williams, Peter F., "BWV 565, a toccata in d minor for organ by J.S. Bach?, Early Music 9, July 1981, pp. 330-337), have since been endorsed by a substantial number of Bach scholars.  The new organist may hear these Bach scholars publicly proclaim something to the effect that "This music is a very good piece indeed, but the liklihood is, that it WASN'T in fact written by Bach, for reasons which I won't go into here," or something similar.

Before dismissing this as the work of a lesser composer the student should bear the following in mind:  Williams was at a loss to explain whose writing this is, other than Bach's, and musicians of immense stature who made it their business to thoroughly study Bach's organ works as an indispensable part of their training, a jury of names including Beethoven, Mendelssohn, Liszt, Brahms, Reger, Franck, Lemmens, Guilmant, Widor, Vierne, and Dupre, among others, many of whom were on the direct teacher-pupil succession back to Bach himself, knew this work to be the bold writing of an organist heavily influenced by North German models whose independent mastery is evident.  None of these masters were ever led to believe, by their own analysis or that of others, that this work was even a transcription, much less written by someone else.  Mendelssohn, who is largely, if not single-handedly, responsible for the revival of interest in the works of Bach in the early 19th century, knew this work to be authentic by grouping it in the same book among copies of other known organ works of Bach in 1829.  These two facts are undeniable:  nothing this bold ever appeared in the organ literature before it, and no composer as bold as Sebastian Bach ever came before him.  He put his composing on a plateau that no one else has ever reached.

In cross comparing this work with the rest of Bach's enormous output, we sense this bottomless feeling, that it's just the smallest little tip of an iceberg.  We're dealing here with a comprehensive musical genius, someone whose sheer mastery of the techniques of composition have never been equaled, one of the greatest minds the human race has ever produced.  In studying his writing we have a chance to become intimately connected with the output of that mind, which is a continual source of inspiration, because there's always more to learn with him.  He seemed to playfully soar above every technical difficulty and was able to ply his Art in any direction to suit his purpose.  The rules of part writing were all his very humble and obedient servants which he bent and broke repeatedly in the service of his Art, and of his God.  He assimilated all national styles into his own and set for himself some gigantic musical tasks and challenges because his way of exercising his religious spirit was to exercise his craftsmanship.  The organ was his most immediately personal medium through which he expressed what was strongest in him, viz., his religious feeling and feeling for musical architectonics.  He proved beyond all doubt, time and time again, that he was able to give the same musical idea any sort of treatment to suit his intention.  If that intention were to serve his work-a-day needs, such as the testing of an organ, then it follows that he would have entertained the idea of creating something of his own to serve that need.  Since he was charged, beginning at Arnstadt, to maintain the instrument entrusted to him, it's logical that he would have invented some sort of music to test it, stretching the instrument's capabilities to its limits in ways too bold and unconventional, perhaps even too risky, for typical Lutheran worship services.

In teaching his pupils, Bach summed up his attitude toward composing in these words:  "... the aim and final reason ... of all music ... should be none else than the glory of God and the recreation of the mind."  Since he never departed from this same religious attitude when composing for instruction or secular purposes, it could never have been his deliberate intention, in writing this or any other work, to make it sound scary.  As Bach scholar Christoph Wolff asserts (Wolff, Christoph, Johann Sebastian Bach:  The Learned Musician, Oxford University Press, p. 72), the very unusual parallel octaves at the outset are explainable on the basis that this is an early work and by the deficiencies of the Arnstadt organ which the composer very probably sought to rectify (see Bach d minor, Part IV).  Any detective can plainly see that this music is doing all kinds of different things which just happen to put every important aspect of a church organ through the most critical tests.  Any music like this which tests the manual action, pedal action, wind supply, wind pressure, and balance between divisions would represent the kind of music Bach would have in tight memory when he traveled to inspect or inaugurate a new instrument, a task he was frequently asked to do.  And yes, while he was testing a new or restored organ, he didn't simply sit down on the bench and turn on the electric blowers, as organists do today; in Bach's time there was no "electric anything," one or more boys from the congregation had to be rounded up to pump the tread bellows to get the organ to play, and typically these boys didn't work for free.  Still, he didn't test new organs in a vacuum all by himself; someone had to meet him at a certain hour, unlock the building for him, and arrange that the organ would play, hence, provide boys to pump the bellows during this time and see that they were compensated.  Both the builder and church council were most likely present on these occasions and would have arranged compensation for the bellows pumpers, however many there were.  It was never up to Bach to pay the bellows pumpers out of his own pocket, and this could have been no hindrance to him accepting the invitation to test an organ as frequently as he wished.  Therefore the thesis that this work with its rushing figuration, massive, held chords built upon low held pedal tones calling for the full power of the organ, antiphonal repartee, and Pedal solos, was likely composed as a test for an organ is a very defendable one.