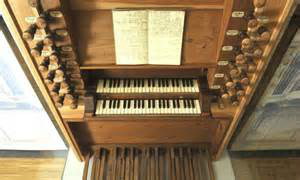 The pursuit of, and return to, stylistic integrity, i.e. what is considered "stylistically correct" or "authentic," is a modern development employed by many in the organ world these days to perform all early organ music up through and including that of the Baroque period, including Bach's.  This is based upon discoveries made in the 1970's and runs contrary to the time-honored school of legato.  Some who were trained in the former are quick to point out several aspects of playing Bach's organ works which they label as critical mistakes.  These identifiable mistakes have mainly to do with rhythm, trills, fingering, pedaling, registration, and touch (articulation) in particular.

The photo shows the famous organ console Bach played as a young man at the Neuekirche [now known as the Bachkirche] in Arnstadt.  In many early organs like this the pedalboard was flat, non-radiating, short by modern standards, and placed not very far under the manuals.  Because of this, the toes were extensively used, and the heels were less easy to employ at the extreme ends of the pedalboard.  This does not mean however that Bach always played the bass line with his toes one hundred per cent of the time.  He would have employed everything, including heels and substitution, if and when he found it expedient, and sitting at this historic console will prove that he was able to do exactly that at Arnstadt, if he wanted.  This may create blowback from those who disagree with this, but at Arnstadt it is, nevertheless, provably true.  Most guides to the organ prefer not to open the can of worms about toes-only playing except to say that, with playing certain repertoire on some organs, it may work better to shape the pedal line phrasing differently using all-toes vs. heel-and-toe.

Currently, in some of the really puristic Organ departments of colleges, Organ majors are taught when playing the "free" non-chorale based organ works of Bach (preludes, fugues, toccatas, fantasias, etc.) to always use the main manual with the plenum (full principal chorus through mixture) drawn, to never change stops, never change manuals, and to play every note of every voice, including the bass line, broken.  The school of legato championed by Dupre and his many pupils world-wide were taught strict legato in Bach playing with all of its associated techniques (substitution, thumb glissando, extensive use of the heels, etc.), which is diametrically opposed [See blog, Rope Pull].  Discoveries made since the death of Dupre however have shown that the moving lines in Bach's organ music should not be performed strictly legato with every single move they make.

That being the case, the strict legato school for playing Bach nowadays is considered by academia to require revisiting.  But it's also true that playing a major Bach work for organ from beginning to end with never a change in sound, never a change in manual, never a nuance in tempo, with unvarying touch where every single note of every moving line, including the bass, is broken.  It sounds choppy at times, and some will never be convinced that it's beautiful or interesting.  Some of the playing is really fine, but we might as well have organs with only one manual; we might as well have no stops, as they would all be on, all the time.  Some professional organists even consider it a fad -- and that the next fad may be worse.  They insist that, in Bach playing, we should change manuals, we should change stops a little (in subtle layers, not in large clumps), and use clean legato (impercievably broken) touch for the moving lines.

The fastest moving notes in Bach demand an imperceiveably broken touch -- an "almost legato" sometimes called "clean legato" or "clear legato" -- or a non-legato touch, but these days we often hear them played too broken, more like marcato or even staccato.  In some Organ departments non-legato and imperceiveably broken are considered the same thing and called "ordinary touch," where imperceiveably broken isn't recognized at all.  The difference is in how imperceiveably broken is classified, i.e., if we lump it with all other forms of broken touch or give it its own category (this author, and his teachers, all prefered to place it in its own category).  Those who make no clear distinction between the two often admit that they tend to articulate perhaps a little too much in their Bach playing, which is a roundabout way of admitting that non-legato is at times a little too broken for the fastest moving lines in Bach.

Regardless of how we classify it, only a shade of detachment (imperceiveably broken) or with very minute, audible breaks between them (non-legato) is what's required for the moving notes in Bach's organ music.  Granted, there's almost no difference between these 2 types of touch, but still, they aren't the same; they're distinct.  The student should keep an open mind to both "schools" (legato and broken) as they both have something to offer.  The legato school held sway with academia and the public for nearly 2 centuries.  Beautiful recordings are still being made under its sway [See menu bar, Videos, Bach Passacaglia].  At the same time it's good to remember that Bach the organist and total musician, if he were alive today, would embrace every type of touch and not filter everything through the prism of one school or the other.

Imagine Bach's great organ Toccata in F, a work spanning over 400 measures, performed mechanically from beginning to end in an unvarying forte on one manual with no change in touch or sound, no nuance at all, with every note in every voice, including the bass, played at 3/4 the written value.  Sadly, this kind of choppy execution is exactly how so much of Bach's organ music, including his fugues, are being performed and recorded these days.  Organists who wish to distance themselves as much as possible from the legato school of Bach playing sometimes exaggerate the articulation to where their broken touch morphs into marcato.  Now imagine the same work performed like one big crescendo from beginning to end with liberal use of rubato and color stops, registration changes at every turn, with stops and couplers being added and withdrawn in huge clumps, nothing articulated, and every moving note merging imperceptibly into every other.  When we try it, the effect is pasty and difficult to distinguish in places.

What exactly Bach had in mind when he wrote his organ music can be argued from now to the Second Coming, but to those in the audience who are already familiar with every note in the work and are listening mainly for the cohesion of the voices, how they move around, and for the technique displayed, a choppy performance may be satisfying enough; to those who want to hear everything played on one manual with never a change of stops, this too may be satisfying enough.  But for the average listener unfamiliar with the work, who doesn't know what note is coming next, who knows nothing of stylistic authenticity and doesn't care, and simply expects to hear music that pulsates, breathes with life, and thrills and moves them, they'll likely to consider this type of performance dull.  The same holds true for a pasty performance with too many registration changes and no articulation at all.  This is the chief danger an organist faces by enlisting under the banner of a "school" [See blog, Rope Pull].

It's true that, on the organs of central Germany in Bach's day, the main manual plenum (full principal chorus with mixture), typically, was pleasing to the ear and could be listened to for long periods of time.  It's also no stretch to say that Bach the practical musician, who experimented in the Art of performance to the fullest, who encouraged all worthy and beneficial developments in the science of organ construction, if he were alive today, would be the first to admonish the performer that, when playing all organ music, not just his own, they might add or retire a stop or two, change manuals, vary the touch, and nuance the music so that it doesn't proceed at a perfectly regular, predictable, unvarying sound, dynamic level, touch, and tempo with every single move it makes.

The fact that the drawknobs in early organs were sometimes outside the performer's reach and somewhat stiff to operate, and the fact that Bach wrote crescendos and diminuendos into his counterpoint all within the context of a single plenum, does not necessarily mean that the starting registration of a free Bach work should never be changed as the piece proceeds.  Many examples could be cited where Bach actually introduces a Pedal solo or has the inner voices reduce down to one line or even has everything come to a complete stop in order to free the hands to add stops or a shove coupler at important places.  His organ fugues almost demand that the starting sound be strengthened somewhat as the piece progresses and that subsidiary manuals be used for secondary passages, episodes, echo passages, or possibly, when manual parts cross.  In his famous "Dorian" Toccata in d minor he even wrote into the score where he wanted the hands to leave and return to the main manual.  With his other major organ works he left this up to the artistic judgment of the performer.

Terraced dynamics with subtle layering of sounds is what's needed for Bach.  On modern organs there's this danger, that it's very easy to overuse piston combos and Romanticize Bach's organ music too much, to solo fugue subjects, to change stops too frequently or in too large clumps, or to employ mechanical devices unknown to the organ builders of his day.  This sort of overdose, where the work gets chopped into pieces under the pretext of creating depth and color with the listener losing the sense of architecture, is the opposite extreme.