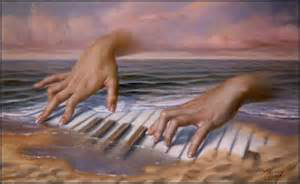 As one embarks upon a serious study of a keyboard instrument an understanding of certain basic and critical information having to do with it needs to be learned.  This primarily has to do with the language of its terminology and how all of its components work together to produce musical sound.  In the case of the organ, this means knowing its principal components, the means by which its wind supply is generated, its various types of key actions and stop actions, and something about wind chests, unification and duplexing of stops, aids to registration, pipework, and the acoustics of organ pipes.  A reference book which explains all these fundamentals along with abundant illustrations is Understanding the Pipe Organ A Guide for Students, Teachers, and Lovers of the Instrument by John R. Shannon.  This valuable work also touches upon achieving optimal sound through location and placement of pipework and even suggestions for if and when simple repairs may be needed.  Every organ student would do well to have a copy of this book in his/her library.

The first pipe organs which emerged in Europe to replace the loud, primitive, medieval Blockwerk organ were constructed with slider wind chests and mechanical (tracker) action which provided a direct connection between the keys and the opening of the pallets, or pipe valves, which permitted air to enter the pipes, which in turn allowed the player to articulate the sound from an instrumental standpoint.  This led to the development of a sense of touch that reflected this intimate connection between the player and the pipes producing the sound.  With the application of electricity to the organ in the late 19th century the manuals were rendered inert in this respect, and the sense of touch, in many respects, died.  Those who play pipeless organs, electronic organs, virtual organs, and digital keyboards exclusively miss out on learning this sense of touch because these instruments do not replicate this sense of touch.  Organists today therefore have to be generalists and specialists at the same time, to know how to use both electrified and mechanical actions.

The first essential of good organ playing is the development of a beautiful legato touch.  This is the same touch which many people transfer from modern piano technique to the organ.  In the Italian language the word "legato" means "bound" and is used to describe the type of touch which prolongs the tone of each note sufficiently so that it exactly connects with the next note in accordance with the Italian principle of bel canto ("he who can join his notes can sing").  Whenever two separate notes speak in succession there will be a moment of time in which the first note ceases to speak and another moment of time in which the second note starts speaking.  In legato playing these two moments are not different moments but one and the same moment.  This type of touch binds successive notes together producing an effect of solidity which makes a degree of contrast possible.

The exclusive use of unvaried legato however can lead to a dull result.  Its full beauty is brought out by means of employing 4 other types of touch when they are suitable and indicated by the musical context.  These include staccato, marcato, and non legato, which are all broken touches, and clean legato, all of which help to provide clarity, contrast, vigor, forcelfulness, and brilliancy in organ playing.

When using staccato each note or chord is separated sharply from its fellows, the release occupying exactly half the written value.  This may be done either by finger motion which accurately releases notes after half their value, by shaking the wrist which may be more suitable for rapid or extended passages, or by a combination of both.  The notes or chords are thus held for exactly half their written value.  This is notated on the page by a dot placed either above or below each note or chord, or by the phrase "sempre staccato."

With marcato, also known as portato, each note or chord is separated from its fellows with the release occupying about one fourth the written value.  The notes or chords are thus held for about three fourths their written value.  This is notated on the page either by a short, horizontal line placed over the notes or chords, by dot and line, or by the phrase "sempre marcato."

With non-legato each moving note is separated slightly from its fellows with the release occyupying about one eighth the written value.  The moving notes are thus held for about seven eighths their written value.  This is usually notated on the page by dots underneath a slur or by the phrase "non legato."  The modern terms articulate touch, "articulate legato," or "ordinary touch" used in connection with Baroque performance practice (including J.S. Bach and his school), is always applied to a broken touch with little breaks made between the notes where staccato or marcato is not implied.  These modern terms, hence, have become synonymous with non-legato.

With imperceiveably broken, also known as clean legato, or clear legato, the player "thinks" legato but gives only the smallest possible release between the moving notes that the ear can detect, so extremely short that it can be heard, but not counted.  The release, if it could be measured, would amount to something much less than one eigthth the value of the written note -- more like a twelfth or, better yet, one sixteenth.  The moving notes are thus held as close to their written value, but not quite, as it is possible to play them -- something like fifteen sixteenths -- far too short to be counted.  This is middle of the road between legato and non legato.  With this touch the player isn't trying to get off the keys, and it doesn't sound broken.  It's an "almost legato."

In the Organ departments of some colleges and universities no distinction seems to be made between imperceivably broken and non-legato, that is to say, in some educational institutions imperceiveably broken touch isn't recognized at all.  These 2 categories of touch should, nevertheless, be understood apart, as distinct and separate, because they ARE different, they SOUND different, and they come about through different means.  In one case (non-legato = articulate legato = "ordinary touch") the organist is consciously trying to "get off" the keys with a deliberate attempt being made to insert clearly audible breaks between the notes; in the other case (imperceiveably broken = "clean legato" = "clear legato") the organist isn't trying to get off the keys and is using their ear to create just a shade of detachment, it falls in place all by itself with repetition, and it still "sounds" legato, only very crisp and clean.