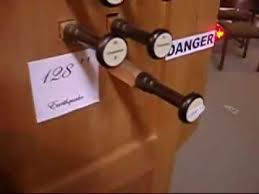 Similarly, the unison pitch of the pedals is described as 16', an octave below that, because the lowest C pedal key (which matches the lowest C1 key of the piano keyboard) is sounded by an open pipe 16 feet long.  Since the accepted lower limit of determinate musical sounds the human ear can detect is around 40Hz, and the lowest 16' octave of the organ sounds frequencies in a range of 32Hz-64Hz, this means that all frequencies generated by a musical instrument below low E in the 16' octave (which corresponds to the E1 of the double bass of the orchestra) are felt rather than heard -- that would include the bottom 4 notes (C, C#, D, D#) with a 16' stop drawn.

A sub-octave pedal stop, or "Double," which sounds a whole octave lower, generated by an open pipe 32'  long generating a prime tone on low C1, is sometimes supplied in larger instruments to provide additional gravity.  Such grave stops may be of principal, flute, reed, or non-imitative string tone, and an important organ can, and often does, have more than one.  Sometimes also, we find instruments in which digital stops of 32' pitch supplement the sounds of real pipes in the Pedal division [See blog, "Hybrid" Pipe Organ, Parts I-II].

In cases where space or cost considerations will not permit the introduction of the largest pipes of the 32' octave, an independent stop of 16' pitch may be joined with another independent 16' stop wired to play a perfect 5th above it, at 10-2/3' pitch (sometimes the 10-2/3' is introduced as a separate stop called "Quint," which makes possible its combination with any pedal stop of 16' pitch).  This combination, which represents the 2nd and 3rd harmonics (1st and 2nd upper partials) of a 32' prime, generates a differential tone represented by the difference between the frequencies of both pipes and produces a "synthetic 32-foot" sound at that frequency.  This differential or resultant tone is weaker than the sound produced by an independent pipe of 32' but its introduction can be a satisfactory alternative.  Such a stop is properly formed of 2 separate ranks of pipes closely situated to each other in the same chamber and typically is controlled by a drawknob labeled "Acoustic Bass" or "Resultant."

From what has been said, the entire bottom octave of a 32' stop is outside the lower limit of the human ear to detect musical vibrations, thus there appears to be no musical reason to provide an organ with stops any lower in pitch than 32'.  People nevertheless are fascinated by extremes.  Monster pedal stops of 64' pitch have been inserted in the very largest pipe and electronic organs which produce real or differential tones having frequencies down to 8Hz on low C.  These have been constructed either of single, individual pipes or 2 pipes wired to each other which sound a perfect 5th apart (at 32' and 21-1/3' pitches respectively) creating a resultant 64' -- so-named "Vox Gravissima," or simply "Gravissima."   Since the bottom octave sounds frequencies in the range of 8Hz-16Hz and this must be spread over 12 chromatic keys, this means that only an 8 Hz difference separates all of those 12 notes.  In that range of frequencies it's impossible for the ear to determine any difference between one note and another, as all notes are rattling at about the same rate.  All that may be discerned, note to note, is an unmusical, rumbling sound -- something akin to a washing machine going through its spin cycle.

The longest full length organ pipe on record (the low pedal C1 of the 64' Contra Trombone stop installed in the Thomas Hill organ in the Town Hall at Sydney, New South Wales) has a wooden resonator as long as a 5-story building, weighs 1-1/2 tons, and has a metal reed made to vibrate against a gigantic shallot at a frequency of 8Hz which, to our ears, resembles the alternating banging of 2 wooden drumsticks on a metal washtub.  One can only surmise what advantage, on scientific and musical grounds, the introduction of such a costly and space-consuming voice in an organ would provide.  It simply cannot be, as some suggest, that the reason this builder inserted this stop in this organ was to create the effect, when drawn, of a rumbling bass drum when the organ is brought up to a fortissimo dynamic and beyond; if such an effect were truly desired, then a real bass drum could have been electrically connected to the Pedal division and controlled by means of its own two drawknobs (single stroke and reiterate) which would take up far less space at considerably less cost.

If the reason was more to prove to the world that an organ building firm could construct such a grave, costly, and independent voice and insert it in an organ, then the same line of thinking could be carried further:  With today's technology, superior materials, skilled mitering, and increased wind pressures, the logical next step would be to construct an independent stop of 128' pitch generating frequencies in its bottom octave down to 4Hz.  For that matter, once we have that in our organ, the next logical step would be to extend that rank downward by 12 more pipes, set those 12 pipes on an offset windchest, raise the wind pressure to 200 inches, and unify that rank down to 256' pitch with a bottom C pipe 85 yards long weighing 20 tons sounding at only 2 Hz, something no one else's pipe organ in history has ever had, or could ever do.  After that, the next logical step is to wire that same rank to play at 256' and sub-quint 170-2/3' pitches, each note sounding 2 pipes a perfect 5th apart, which would generate a resultant differential tone of 512' pitch.  A Vox Magna Sub-Gravissima Absurdus Profunda 512' stop like that, with bottom C producing a frequency of only 1 Hz, would have to be the admiration of every organ builder and musical connoisseur in Western civilization and the envy of every concert hall in the world.

Not.  Somewhere in this insane, unsound, deranged, utterly foolish craze to build the biggest and badest, latest and greatest, tallest and widest, heaviest, lowest-pitched, and loudest-sounding machine on the face of the earth, one has to call a halt on scientific, physiological, musical, and common sense grounds.  When the maximum frequency range of human hearing is 20Hz-20,000Hz, and the lower limit of perceptible musical tone is agreed to end around 40Hz represented by the low E1 of the double bass of the orchestra or the low E1 key of the pedals of an organ with a 16' stop drawn (4 more chromatic notes, down to low C1, are provided below that by the 16' stop), one is left to wonder what can be said of those frequencies which descend into the sound tombs of the 64' octave.  Such powerful vibrations are not perceptible as musical tones and, while they may succeed in shaking us bodily, they fail to impress our musical senses.  Moving chromatically down the frequency spectrum from 16 Hz at 32' C to 8Hz at 64' C, we find a difference of only 8Hz over 12 notes.  The ear interprets these 12 notes only as different versions of the same unmusical noise.

Believe it or not, experiments conducted on the organ at Hammerwood Park (a country house situated in Hammerwood near east Grinstead, east Sussex, England) have in fact involved frequencies descending into the 128' octave.  Using a super subwoofer, a mega-monster electronic 128' stop actually has been created which makes a scale from 4Hz up, producing an enormous racket that probably only a whale can hear as a tone.  Were that not enough, a "Self-Destruct" button which draws the 128' and 64' frequencies along with the 32' is also being contemplated for introduction on this console.  When added to the full organ the effects of this combination of 3 pitches are curiously interesting from an academic point of view but nothing more than the ultimate in noise machines.  A sense of humor is considered necessary equipment for conducting these kinds of mad sonic experiments, along with the premises being very substantially built to withstand, if necessary, the tumult of an earthquake.

Besides stops of 64' pitch, another class of stops might be considered under the heading "noisemakers," or "noise machines."  These are stops of 4-4/7' pitch in the pedal and 2-2/7' and 1-1/7' pitches in the manual divisions which corroborate the 6th upper partial tones of the 32', 16', and 8' harmonic series, respectively, and are represented in the organ by the so-called Septieme (pronounced "set-yem'").  This rank, sometimes labeled "Sharp Twentieth" or "Flat Twenty-First," is formed of open metal, cylindrical pipes voiced to yield a soft principal tone.  When sounded on the note C1 (bottom C in the manuals) the 6th upper partial tone lies between middle A#3 and Bb3 of the physical scale and is therefore slightly out-of-tune with the middle A#/Bb key of the chromatic keyboard tuned in equal temperament.  When this stop has been correctly and scientifically voiced, regulated, and tuned it remains out of sync with the chromatic keyboard, and, being tonally unruly this way, when it is introduced as a complete stop in any organ, it should be the most subdued in tone of any mutation stop and never unduly assertive to keep it from becoming a problem child.  As an element of a complete harmonic structure it is a desirable voice for the foundation work in an important organ, preferrably as part of a 4-rank compound (mixture) stop in which it can sound favorably along with the 4th, 5th, and 7th upper partials belonging to the same harmonic series (i.e. the 17th, 19th, and 22nd) and be correctly adjusted tonally.  When such a stop is introduced by itself it is free to combine with any other grouping of stops, lending at times an interesting color when surrounded by other stops closely related in pitch.  The potential is also there for it to become a noisemaker unless caution is exercised with its use.

If it should ever be discovered that certain notes in a Pedal stop of 32' pitch are dead or the pipes producing such notes are out-of-tune, poorly regulated, or late to speak, and the music at hand calls for drawing that stop but does not rely particularly heavily upon these same notes, this author is of the opinion that this stop should still be drawn so that the listener does not miss out on hearing some of its sound.  To think of such a voice under these conditions as simply another class of "noisemaker" and keep it retired causes the listener to miss the opportunity of experiencing its sound at all.  Opinions among organists will vary about this, and it can be argued either way, but this author is inclined to put up with a couple of misbehaving notes in such a stop, take what good can be taken, and just go from there.  When the music is showing an appetite for such a voice, half a loaf of bread seems to be better than none.  It's also true that the squeaky hinge gets the oil; any misbehavior of a few notes is inclined to raise awareness with the right people who are in a position to take action to correct it.