Listening For The Listener 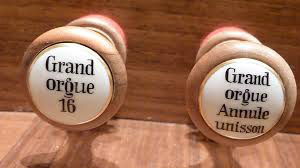 On the organ it's very tricky deciding which notes you hold in order for the listener to hear better the other moving lines, which is the most important thing.  Often in a Bach fugue, for example, there are so many held notes that all kinds of moving parts aren't really audible.  They are just vaguely moving.  The more the left hand line is connected, the less the soprano line is evident to the ear, the more it's compromised.  This is related to the fact that grave sounds travel farther through the air and have more fullness and impressiveness than acute ones, and the acoustical properties of buildings can create an inequality to the ear between treble and bass, resulting in an apparent weakness in the treble portion of the organ's compass.  Because of this, at times we have to "change the manuscript mentally" to get clear what the composer wrote on the page.  Virtuoso organist Virgil Fox (1912-1980) put it this way:  "Correct bad composition if it gets in the way of the composer's intentions."  With Bach we simply need to break the left hand line, if needed, by detaching so the listener hears the top line more clearly.  We have to pick things up in unusual places, not hold them quite as long, but go part of a chord once something else starts, and that's true in so much organ music, not just Bach.  In the Bach fugue we're not altering a lot of things but just working with what's there, and not connecting everything.

Cesar Franck [See blog, The Cesar Franck Pose], who had enormous reverence for the music of Bach, calls for the drawing of the "Grand Orgue 16" suboctave coupler (photo) during the last 3 pages of his Grande Piece Symphonique for organ, which couples every stop in that division an octave lower on itself.  Unison (8 foot) foot stops sound at 16-foot, octave (4 foot) stops sound at unison, and super octave (2 foot) stops sound at the octave.  All mixtures sound an octave lower as well, creating a very massive, rich sound.  Since the 16-foot stops in the Grand Orgue division are already drawn, considerable 32-foot manual tone is also generated.  Franck took this into account by keeping most of the notes for the hands above middle C4.  When the instrument at hand lacks this suboctave coupler, the spread chords in the last 12 measures, as written, sound thin and unsupported.  In this situation, to get something of the same effect Franck intended, the left hand notes of these closing chords might, with perfect justification, be extended downward and enlarged in the left hand to help provide the sonority and underpinning the composer had in mind.  Some experimentation would, of course, be required, but having to practice this music on an instrument lacking this sub-coupler is, in a sense, a blessing because it will help teach the performer how to develop the ingenuity for providing the rich, massive sound the composer would have known.

With other composers, such as Max Reger, who also had an enormous reverence for the music of Bach, a lot of the things inside his organ music, as notated, didn't always make it for the listener.  When a big Reger piece is performed exactly as written, sometimes the listener hasn't heard everything on the page, and it's wonderful writing.  Here the performer has to break hundreds of rules in how he wrote it, but we do it because our ear tells us that we can't hear clearly what we're playing, and we listen to it until we find a way that it sounds musical.  It comes with experimentation and listening for the listener, which is really a great concept.

One teacher said his teacher, in turn, who had studied in Paris with Dupre, told him, over, and over, and over:  "Don't listen to it as YOU hear it, separate from that and listen to it as THE LISTENER hears it, these are 2 different things."  If the player only listens to it as he or she hears it, sometimes things aren't kept clear that really need to be kept clear.  The same is true of singers [choir members].  We talk to them about diction until we're blue in the face, that they need to exaggerate their diction to have the words heard clearly by the listener, but they don't want to exaggerate, it's more work.  They're content because it makes sense, the words are right in front of them.  The listener doesn't have the words in front of them.  The listener doesn't know the notes.

What composers wrote on the page isn't always what the listener gets to hear.  Sometimes the habits the organist adopts with practicing is partly responsible because organ music is so beautiful, the desire to play it is so great, and the standard repertoire is so vast; once the mechanics of fingering, hand division, pedaling, and manual changes for one piece have been worked out, the temptation is to move on to another piece before fully considering the listener's ear.  Sometimes we start too quickly.  We play all the right notes in the right order but don't always get our listeners with us.  We don't always pay heed to how much time is needed for rests, or a bit of a breath, like in singing.  The listener needs a bit of a breath too, to catch up, and be ready to go on.  Often we take off too quickly and leave them behind, then they have to catch up, and they're a little lost, briefly.  It's helpful if we linger a barely appreciable trifle on the first note when something else starts in order to get the listener with us, and not jump in at a perfectly regular tempo; then, to speed up in the middle, then slow down a trifle at the end.  In the course of a piece it's very advantageous to incorporate minutes stretches ("pull outs, stretch outs") in the tempo just before something else starts, such as when the Pedal line in a fugue is about to enter, a quick flurry of notes ends, or a new section begins, and slow down slightly.  The overall rhythmic framework needs to be maintained.  Too much rhythmic freedom is just the opposite.  It's very easy to let the excitement which builds as the piece develops to cause the tempo to pull ahead.  It's simply a matter of sticking to a tempo and not letting the pulse be perfectly regular and predictable with every single move it makes, but to add subtle nuance in certain places so that it doesn't sound like a machine is playing, page after page.

Some judgment is needed here [See blog, Trust Your Ear].  In certain places a pinch of a pull out is good, but if we pull out too much or pause too long it will ruin the drive.  For the Pedal line to remain clear under big, held chords, some bold adjustments may have to be made.  It's sometimes better not to rush big chords like this and to release everything before a Pedal solo starts.  Often the Pedal line remains legato through big detached chords, but not always, not 100% of the time.  Heavy chords may have to be detached more than what's indicated on the page to allow the Pedal line to come through.  Repeated low Pedal notes need time to get on speech, especially with 32-foot stops drawn, and it's important to hold Pedal notes long enough so the listener's ear can detect a steady state of pipe speech.  The lowest note or two of a big left hand chord, if it blocks the Pedal line, may have to be dropped in order to let the bottom notes of the chord out of the way.  Now, if the player had the right organ with a really, really driving Pedal, then it might be okay to hold the whole chord.  Otherwise, the player may want to release the bottom portion of the chord, perhaps gradually upward, as the Pedal line begins.  The part of the chord which doesn't block the Pedal line, obviously, should never be dropped.  Again, a rapidly descending Pedal line written against high held chords should never run straight down as though it were a race to get to the bottom of the pedalboard.  That loses the listener.  We should pull out a little bit as we go, otherwise it's over with before it starts.  We ought to start it with a little bit of ease, not exaggerated, just a little easy to get the listener with us, then keep it energetic, speed up some in the middle, then slow down a little bit at the end.  The idea is to introduce subtle nuance to slightly stretch the take off and the landing.  If the player takes off like a rocket and leaves the listener behind, that may be virtuosity, but it's not serving the music.