Balance In Organ Playing, Part I 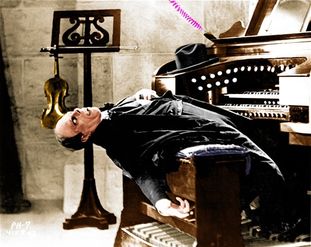 Many years ago, before he passed away, I became acquainted with a very nice man who played for his church which had a medium sized pipe organ in fully playable condition which was being employed during the worship service.  He was a very capable organist, his congregation was fortunate to have him, but he had no interest in learning new repertoire save for the easiest pieces.  He once said to me, proudly moreover, "I don't mess around with all those fancy toccatas."  He was quite comfortable being stuck in this hamster's wheel and was content not to reach for any higher level of attainment.  I only heard him perform once, that being a wedding service, what he played on that occasion he played well, but I suspect all those fancy toccatas stood ready at any moment to force him to come to grips with certain habits of his which were generating fatigue and maybe certain balance issues.  This is often traceable to bench position.  All those fancy toccatas meant more work ... AND, all  those fancy toccatas would have thrown into high relief any wrist or balance issues of his, thus, rather than working at it, to reform old habits, he rationalized the importance (to him) of that part of the standard repertoire.

We sometimes encounter something of the same thing when working with our choirs.  The people in our choirs are all precious, wonderful people.  And, bless their hearts, we talk to them until we're blue in the face, to exaggerate their diction so the people in the pews can hear what's being sung clearly.  But with the choir, they don't want to do that.  It's more work.  It already makes sense to them.  They have the words right in front of them.  But the listeners downstairs don't have the words right in front of them.  The listeners, many of 'em, don't know the words.  Most of 'em don't know the notes either, when we're performing solo [See blog, Listening For The Listener].

The organist in the above photo never came to grips with his own bad habits, either.  He messed around with all those fancy toccatas anyway [see Widor 5 toccata, Part I], and look what happened:  it cost him a neckache, a backache, a numb right hand, and almost a nasty fall into the pedals ... and ... the fact that he just found out that somebody changed his piston combos certainly didn't help matters.

Seriously, take a close look at your bench position and analyze it.  There is nothing intimidating about introducing the right kind of change carefully, purposely, and thoughtfully in order to improve one's command of the organ.  Improvement is NOT tied to a person's age.  As long as we're awake and breathing, and our mind is intact, we're learning, and learning is improvement.  Learning is in fact the process which advances or makes progress with anything.  This blog exists for this very reason.

All organ playing is a balance of ease and tension.  In a practical sense, this equilibrium should work out to about half and half, 50% ease and 50% tension.  Some days it may be 51 and 49, or maybe 52 and 48, but the idea for the player is to get near the median so they stay in the middle of the road.  Anxiety can be the mind killer, but too much relaxation isn't good, either.  No tension, no play, but it has to be kept in balance and close to half.  Organ playing requires no physical strain, but it's a balance between how much relaxation to blend in, and still stay focused.  In that respect, it's extremely athletic.

How an organist sits on the bench is balance.  Balance is a too small word for a very great thing [See blog, What About Bench Position).  If we can agree that balance lies at the very foundation of the physical control from which all technical precision develops, and that whatever is correct with respect to sitting at the organ ought to permit maximum balance in order of the body to function at its very best, then it follows that this should be given special study from the very beginning.  The player simply cannot afford to permit his or her ideas about how to sit on the bench to be formulated by past successes in performing repertoire no matter how wonderful they may have been, any habits of playing that have become second nature over the years, or observations made of other players that he or she admires.

For one of the finest studies in print on this subject we can recommend T. Ernest Nichols' spiral bound book Virgil Fox:  The Innermost Secrets.  In this one little book alone, there's a wealth of information about modern piano-based technique and other important concepts.

Everything with organ playing is balance.

Even though the anti-shoe brigade is in full force these days, balance also is involved with an organist's footwear [See blog, Playing Barefoot, The Ten Commandments Of Organ Practice].  For the majority of players prolonged pedal practice without shoes, in some case, can even lead to ankle strain and injury.  The shoes used should have a thin leather or suede sole.  These should be built on a straight last so the soles do not project.  The heels should be slightly elevated and made of leather [See blog, Shoes, Part I].  The use of an elevated heel results in less ankle movement and allows more rapid playing of scalar passages and the playing of thirds by stepping across an intervening pedal key -- which playing in socks does not permit.  Beyond that, the claims of authorities on the subject differ widely, giving rise to a wide variety of styles and shapes in actual use.  Specialty shoes may be obtained from many sources and can be ordered from a number of companies.  Playing in "street shoes" is acceptable as long as they're clean, dry, made of material that will allow the foot to easily glide on the keys, have a slightly elevated heel, and are otherwise of the correct construct to allow for deft technique.

It's critically mportant to remember that technique exists for the person, not the person for the technique.  When practicing, if we come across something with technique that's leading to wrist or ankle strain, we adapt it or leave it out.  The last thing we want to do is develop an injury.

Some players find it handier to not have to switch into organ shoes and then back to street shoes, and they wear one pair of shoes that will work for both.  Others prefer to either bring their organ shoes back and forth each time or to just keep their organ shoes at the building where the organ is, then switch into them when they arrive to perform.  The system we should use it the one that works best for us.

Organmaster shoes, which are made by Capezio, come with a 1-1/4 inch elevated heel.  These have a very thin suede sole that will easily wear through if used for walking, thus they need to be removed when the organist leaves the console.  The Capezio SD103 mens social dance shoe is made with a 1 inch elevated heel that will also work fine for playing the organ [See blog, Shoes, Part IV]; these can be worn as a street shoe as well, but the bottoms need to be carefully checked for dirt and grime before playing the pedals.  Tic-Tac-Toes is another dance shoe company which manufactures a good organist shoe with built-up heels.  These type of dance shoes are not necessarily better than anything else, and every organist will have his or her preference.

Virgil Fox, for example, preferred only a 3/4 inch heel; his organ shoes were simple black patent leather lace-up tuxedo style shoes with a standard 1/2 inch heel which he had built up another 1/4 inch (being the showman that he was, he also had the backs of his heels and the tops studded with rhinestones ... Hector Olivera, when performing in public, also wears rhinestones in the heels of his shoes).  Marie-Madeleine Durufle, for her part, preferred 4 inch stilettos.  Some organists even prefer all rubber heels which tend to grip the pedal keys and make sliding from one key to another more difficult.  Nonetheless, wearing an elevated heel is helpful because pedaling becomes more deft and requires a minimum of motion, permitting more accuracy in very rapid passages because moving from heel to toe there is less ankle movement.  This can be critical when playing certain historic organs, particularly in France where it takes a lost of pressure on the keys to get the pedals to play because of linkage and where the heels cannot be used as easily.  This has been alleviated to some extent with the construction of new consoles.  An elevated heel is also necessary to permit intervals of thirds or fourths to be played with a single foot (required in certain compositions), the note farthest from the center of the pedalboard being taken with the toe and the note closest to the center with the heel.  This is to miss any notes in between [See blog, A Third Hand].

Balance is involved with an organist's eyewear.  It's never a good idea to practice wearing bifocal or trifocal glasses.  This habit tends to tilt the player's head backward in order for the eyes to see what's on the rack.  The resulting imbalance, after a little while, can lead to neck strain and headaches.  Certain historic organs in Europe were built with a movable rack on a hinge mechanism which allowed the rack to be positioned to the side or closer to the eyes, but most often, on a large instrument, it's in a fixed position, centered over the coupler rail above the top manual, and at arm's reach.  Organists who wear trifocal glasses are advised to have a special pair of glasses made to whatever prescription is in the middle lens and with oversize, tall lenses which tend to close the space between the chassis that holds the lenses and the cheek bones so that everything on the page is in focus at arm's reach, which will allow the eyes to see everything on the page and on the lowest manual clearly without moving the head.

Balance is also involved in what our teacher assigns us from the standard repertoire or which new pieces we ourselves decide to tackle as work-a-day organists.  Since audiences ike to hear easy music when it's played well, it's good advice to spend time learning easy music that sounds hard rather than music that sounds easy and is fiendishly difficult.  Balance is needed in the selection of new repertoire so that our knowledge and skills are layered gradually, like layering sheets of paper one at a time, or climbing a ladder one rung at a time.  No one climbs a ladder by taking their first step on the bottom rung and either stops there or takes their next step on a rung 2/3 of way up.  The same kind of balance comes into play in learning new repertoire.  Every successful organ recital is a study in balance as well -- a balance between what the audience might know and new things, a balance between slow and fast music, a balance between loud and soft sounds.  When two performers are involved it's also a balance between duets and solo pieces.